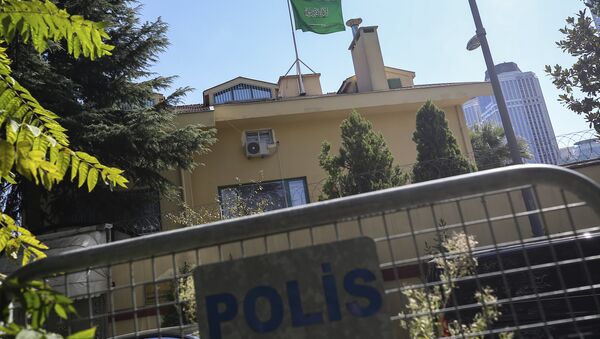 Sputnik has discussed the investigation into Jamal Khashoggi's disappearance with Nader Habibi, professor of the economics of the Middle East at the Crown Center for Middle East Studies, Brandeis University.

Sputnik: What do you think will be the effect on Turkish-Saudi relations following what has happened and that is, of course, that we're having a search now of the Saudi Embassy which is unheard of to have a sovereign embassy searched for criminal evidence of some kind of criminal action…

Media Release Footage of Saudis Reportedly Linked to Khashoggi Abduction (VIDEO)
Nader Habibi: The Saudi government is not under any international diplomatic obligation to bring the Turkish investigators inside the consulate, nevertheless, the Saudis have offered, volunteered to allow an inspection to take place. The impact on Saudi-Turkish relations will depend on what is revealed ultimately.

If there is any solid evidence that the journalist was killed or abducted by Saudis inside the consulate then that is going to be very damaging because President Erdogan of Turkey would be under considerable pressure domestically to take action in response because this is a clear violation of diplomatic norms by Saudi Arabia and also the sovereignty of Turkey for something like this to take place, a diplomatic, political assassination.

So it all depends on the outcome of the investigation. And if there is no clear evidence then it could be a matter of discretion by Turkey and I think then the Turkish government will take into account all of the economic and diplomatic relations between the two countries in responding to what has happened. But as of now, it seems that the public opinion inside Turkey is strongly moving towards the fact that the Saudi Consulate is responsible for the fate of this journalist.

As I mentioned earlier, diplomatic relations between Turkey and Saudi Arabia had already been damaged by a number of events in 2017 with respect to Turkish support for Qatar and even before then, in 2011 after the Arab Spring uprising there was a dispute between Turkey and Saudi Arabia because Turkey sided with the uprising and the supporters of the uprising in Egypt and other Arab countries. Saudi Arabia, on the other hand, was trying to stabilize these countries and it actually contributed to the fall of Mohamed Morsi in Egypt, whereas Turkey was a supporter of President Morsi's government for the short period that he was in power.

‘Royal Family Makes Sure’ Saudi Dissident Voices Aren’t Heard - Activist
So all of these factors have affected the relations between the two countries already. Nevertheless, the Saudis are major investors in the Turkish economy. They have been purchasing real estate and they have many businesses that are active in Turkey and because of those investments, I think the Turkish government would try to at least maintain good relations as long as possible.

The other possibility is that diplomatic relations might be deteriorated but a certain amount of business relations between the two countries, especially with respect to private businesses is likely to continue. And I'd also like to add that the Saudis consider Turkey as a major tourist destination and in recent months an average of 700,000 Saudi tourists have visited Turkey.

Sputnik: It's also interesting to note that it was after, I believe, Mike Pompeo issued a statement saying that senior US diplomats had spoken to the Saudi counterparts and they had called on the government of Saudi Arabia to support a thorough investigation of the disappearance, I believe that's when it was agreed that there would be this search of the embassy; but once again, if what was suspected that there was a van with blacked out windows that left about two hours after he entered the embassy then it's likely that there is no trace of him inside, but I'm just wondering have there been previous precedents of this kind of criminal activity on the part of the Saudis? And how damaging was Khashoggi to the Saudi regime?

Nader Habibi: On your first question, I really don't have much information, I'm an economist and focus on economic relations but as far as the criticism of Khashoggi, this journalist, he was very outspoken in criticizing the government's economic policies, in criticizing human rights record of the young leader of Saudi Arabia Mohammed bin Salman, particularly when the Saudi government arrested a large number of businessmen, wealthy Saudi businessmen, for a few weeks and forced them to pay a considerable amount of money to the government which he was very critical of this policy and spoke about the adverse consequences of the way these businessmen were treated.