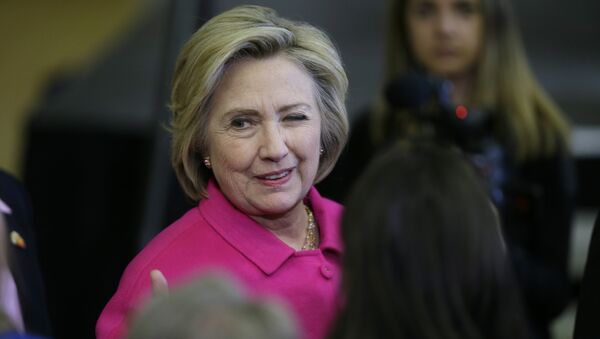 © AP Photo / Charlie Neibergall
Subscribe
Former US Secretary of State Hillary Clinton remarked earlier that Democrats “can’t” keep civil ties with their opponents, who “want to destroy what you stand for,” apparently referring to the sweeping national division over the Kavanaugh case.

Former First Lady Michelle Obama has rejected comments from Hillary Clinton and former Attorney General Eric Holder, who remarked that Democrats should by no means be civil with Republicans.

TV host Savannah Guthrie asked Mrs. Obama, who was invited to “The Today Show,” to comment on Holder’s words about “a new motto” Democrats should have:

“What would you say now about your motto? Do you think it still stands?” Guthrie asked.

However, Obama responded by saying she continues to stand by her motto, while Holder’s alternative is not the right message to deliver to children.

Democratic Senator Heidi Heitkamp earlier spoke out along the same lines against Hillary Clinton’s statement that liberals “cannot be civil” towards Republicans, branding the approach unproductive and even “ridiculous.”

"I mean, I can't imagine how you get anything done if you don't bring civility back into politics, and that goes for both sides," she went on to say on CNN’s “Anderson Cooper 360,” going on to voice her hope for “common ground” to be found that “sexual assault is more prominent than people thought it was.”

The stark remarks arrived in response to Clinton’s fiery comments on the inter-party relations on Tuesday.

“You cannot be civil with a political party that wants to destroy what you stand for, what you care about,” Clinton told CNN’s Christiane Amanpour, adding that “civility” may be brought back again if “we [Democrats] are fortunate enough to win back the House and/or the Senate.” “Until then, the only thing Republicans seem to recognize and respect is strength,” she noted.

Twitter users appear to have appreciated Heitkamp’s remarks, noting she “deserved praise” for them:

Heidi Heitkamp deserves praise for this. Thank you. https://t.co/ZiN3IYnJzZ

One user picked up on the inter-party verbal duel, addressing it most humorously and much in line with recent news agenda:

“Wow. Heidi Heitkamp criticized Hillary Clinton or, as Dems call it, committed a grievous act of sexual abuse,” he wrote.

Another netizen pointed to the fact that Heitkamp is virtually a red state “democrat,” putting the word into inverted commas.

Another one chimed in, saying Heitkamp’s comments are the reason why she will lose in the North Dakota vote.

This is why you're going to lose. https://t.co/ZKtGJRYE85

The exchange, although scattered over two days, arrived directly after Brett Kavanaugh was finally sworn in as a Supreme Court justice on Saturday after much prolonged Senate hearings in light of his sexual misconduct accusations.

North Dakota Democratic Sen. Heidi Heitkamp, who is considered to be the Democrats’ big hope for the upcoming midterms, is meanwhile down in public polls by a considerable margin, with Rep. Kevin Cramer outrunning her by 12 points (53 percent to 41 percent), according to Fox news’ poll. Republicans have had Heitkamp losing by double digits in their private polling for several weeks now, Politico cited a GOP strategist working on Senate campaigns as saying.

Even Democrats confirm that Heitkamp, who hopes to become reelected in the predominantly red state, has lost much of her approval rating since she voted against Brett Kavanaugh’s confirmation to the Supreme Court, the edition reported.

Heidi Heitkamp says she was ready to vote for Kavanaugh. Then she watched his body language. https://t.co/L4oAbADJZ1