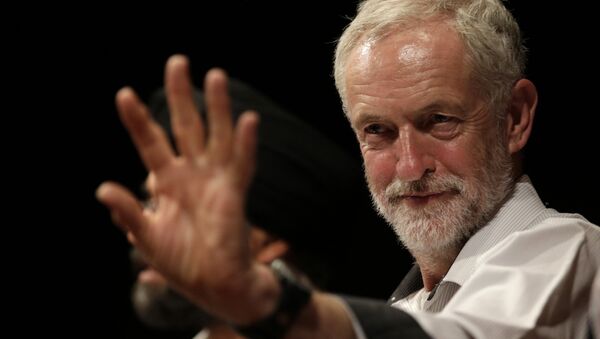 UK Labour leader Jeremy Corbyn plans to create an Emancipation Educational Trust aimed at educating British students on the history of slavery, colonialism and the British empire. Labour MPs said that the Trust will "deliver school programmes, organise visits to historical sites, as well as focusing on African civilisation before colonisation and the resilience and sacrifice of those enslaved and the struggle for liberation."

"Black history is British history, and it should not be confined to a single month each year," Corbyn said in a speech prior to his upcoming visit to Bristol. "It is vital that future generations understand the role that black Britons have played in our country's history and the struggle for racial equality."

Black history is British history, and it should not be confined to a single month.

It's vital that future generations understand the immense contribution Black Britons have made to our country's history. https://t.co/hCZ2o3PGRy

He will also visit IC Visual Lab's ‘Alone with Empire' exhibition on the legacies of colonialism along with shadow women and equalities minister Dawn Butler.

Corbyn added that Paul was a true British hero and that his story "should be as widely known as Rosa Parks and the Montgomery Bus Boycott," and that Paul Stephenson and the Bristol Bus Boycott were inspirational reminders set by Black Britons "that our rights are hard-won, not given."

As a black female scientist living in the UK I feel that we do not learn enough about the contributions that black people have made. Everyday during black history month I will be highlighting the story of a famous black scientist, clinician or inventor. #blackhistorymonth

Corbyn stated: "It was the bravery and determination of people like Paul, standing up against injustice, that paved the way for the first Race Relations Act and the outlawing of such discrimination in our country."

He also added that Black History month was a crucial chance to celebrate the "immense contributions of Black Britons" to the UK as well as reflect on the nation's common history and "ensure that such grave injustices can never happen again."

"In the light of the Windrush scandal, Black History month has taken on a renewed significance and it is more important now than ever that we learn and understand as a society the role and legacy of the British Empire, colonisation and slavery," Corbyn added.

A spokesperson from the IC Visual Lab told Sputnik that there were many benefits to teaching Black history across all demographics of British people. "There cannot be a full understanding of British History if Black history is removed or omitted from the national curriculum," he stated.

The spokesperson added that programs like the Emancipation Educational Trust would be successful as they "can provide the tools for individuals to understand their own heritage, but can also contribute to presenting a more balanced history of Britain which better reflects society today".

The IC Visual Lab also mentioned that many attendees have often noted their own lack of knowledge regarding Britain's colonial past while mentioning that "it was absent in their education".

"We've also found that individuals enter the installation with preconceived ideas of what Empire is and how they should respond to it, however, often feel that they lack the educational tools to properly engage, making a programme like this much needed," the spokesperson continued.

In celebration of Black British History Month, the Twitterverse has been abuzz with comments, with social media users sharing their proudest memes of Black history from both sides of the Atlantic.

🌸 Words cannot express how excited I was to interview @renireni 💞 a London based feminist activist, podcaster, journalist & author of ‘Why I’m No Longer Talking to White People About Race,’ the Jan/Feb @oursharedshelf book pick.

Dawn Butler, the UK's first elected female African-Caribbean Government Minister, tweeted in support of Labour's proposals, adding that they will teach the strength and resilience of black history" through the new trust and will "tackle the race pay gap".

A @UKLabour government will teach the strength and resilience of black history via its emancipation educational trust. We will also tackle the race pay gap @SadiqKhan
Identified.

Working together towards a more equal society.
https://t.co/gheWYgx9QC

The Royal Society initiated a campaign dedicated to informing followers about significant Black contributions, both in America and Britain.

For the second week of #BlackHistoryMonth our theme is #WomeninStem, to tie in with this year's #AdaLovelaceDay. We'll be celebrating the many black women who have changed the world through their STEM expertise.

Patricia Bath invented a treatment for cataracts and is the first African American female doctor to receive a patent for a medical innovation #BlackHistoryMonth #WomenInStem https://t.co/8jytC3eaEO pic.twitter.com/Rmfx9zDeTB

London-based Black culture magazine Blacpire shared an interesting clip from 1976 on working class Londoners and their thoughts on racism.