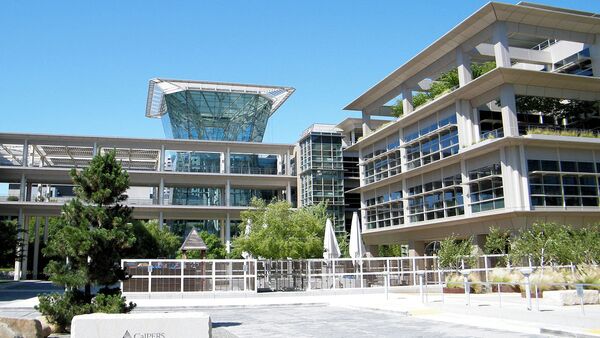 CC BY-SA 3.0 / Coolcaesar / CalPERS headquarters at Lincoln Plaza in Sacramento
Subscribe
A bipartisan group of US senators presented a bill targeting Russian sovereign debt in August 2018 over Moscow's alleged interference in the 2016 presidential elections. The bill is currently being reviewed in the US Congress and if it passes will threaten several major American investors.

The California Public Employees' Retirement System (CalPERS), the biggest US pension fund has increased its investments in Russian sovereign debt by 8% over the last year up to $460 million, according to papers obtained by Bloomberg. This makes the fund the 10th biggest foreign investor in Russian government bonds among those who disclose such data.

The increase in investments is taking place amid growing tensions between Washington and Moscow and threats to sanction Russian sovereign debt. CalPERS' spokeswoman Megan White, cited by the media, said that the fund's investments "follow federal and state laws" and are made in compliance "with directives from the CalPERS board."

In an interview with Bloomberg, London-based senior strategist at Union Bancaire Privee Koon Chow noted that the fund, as well as other investors, may press the Congress to drop the sanctions against Russian government bonds. At the same time, he expressed doubt that they would succeed.

The group of US senators introduced a bill in August 2018, containing a package of punitive measures aimed at Russian sovereign debt and energy sector companies over the country's alleged meddling in the 2016 US presidential elections. If the bill passes, Secretary of State Mike Pompeo will have to determine if Russia may be designated as a "state sponsor of terrorism" and thus eligible for new set of sanctions.

Russian Finance Minister Anton Siluanov warned that Moscow will take measures in the event the US imposes sanctions against its government bonds. The Central Bank of Russia expressed doubt that such sanctions could influence the country's economy in any significant way.

Russia has repeatedly denied the accusations of its interference in the US presidential elections. Special Counsel Robert Mueller is currently conducting a probe into alleged ties between US President Donald Trump and Moscow, but so far has failed to come up with any evidence proving such a connection.