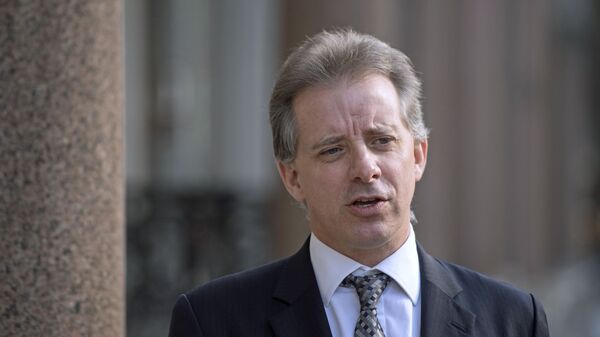 Kit Klarenberg
All materials
Christopher Steele, the former MI6 spy behind the highly controversial Trump-Russia 'dodgy dossier', has emerged from the shadows and spoken of the importance of speaking "unpalatable truths to power." It's an odd intervention, given his close association with the dissemination of unpalatable untruths.

Steele went into hiding in March 2017 after being named as the author of Fusion GPS' private intelligence report alleging misconduct and conspiracy between Donald Trump's presidential campaign and the Russian government before and during the 2016 election. However, being ranked 38th in Vanity Fair's list of the world's 100 most influential people was enough to make him break cover — he emailed the magazine thanking them, and seemingly aimed a coded slight at Russian President Vladimir Putin, who ranked 58th, and Trump, who didn't rank at all.

"I find myself in the company of many talented and distinguished people, although I personally would not accord such accolades to some of the other foreign nationals included in the list. In these strange and troubling times, it's hard to speak unpalatable truths to power, but I believe we all still have a duty to do so. I salute those on your list, and otherwise, who've had the courage to speak out over the last year, often at great personal cost. At a time when governance is so distorted and one-sided, as I believe it currently is in the United States, the media has a key role to play in holding it accountable," Steele wrote.

Dossier Dodge? US GOP Lawmaker Fails to Meet With UK Spy Chiefs on London Trip
The publication has convened a 'New Establishment Summit' in Los Angeles for all individuals named in the list, but Steele declined the invitation, stating "in the present legal and political situation I am unable to do so".

Steele spoke with reference to litigation that arose in wake of the Fusion GPS dossier's publication by BuzzFeed - a move criticized by many other mainstream outlets. 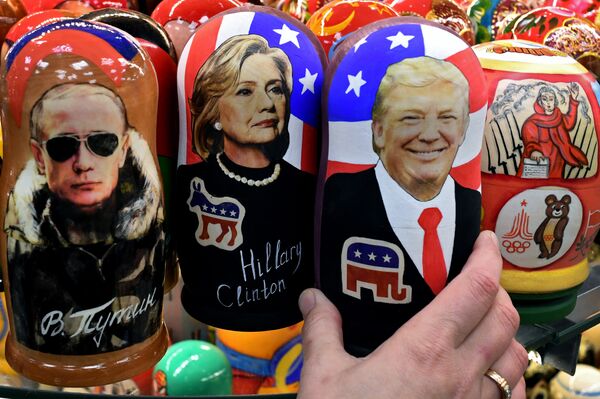 Traditional Russian wooden nesting dolls, Matryoshka dolls, depicting Russia's President Vladimir Putin, US Democratic presidential nominee Hillary Clinton and US Republican presidential nominee Donald Trump are seen on sale at a gift shop in central Moscow on November 8, 2016
© AFP 2022 / Kirill KUDRYAVTSEV
Despite this caveat, Steele has repeatedly stood by the various bizarre assertions in the dossier, claiming at least 70 — 90 percent of its content is accurate, bar the notorious 'golden showers' allegation, which suggested Trump hated then-President Barack Obama so much that when he stayed in the presidential suite of the Ritz-Carlton Hotel in Moscow in 2013, he employed "a number of prostitutes to perform a 'golden showers' show in front of him" in order to defile the bed used by the Obamas on an earlier visit. Nonetheless, Steele somehow remains convinced that the claim has a 50/50 chance of accuracy.

His confidence is shared by few with in-depth knowledge of Russia. For instance, former British Ambassador to Russia Tony Brenton said its contents "look pretty shaky," and expressed doubts over Steele's ability to penetrate the Kremlin and Russian security agencies, given he's an outsider.

Former acting CIA Director Michael Morell has also raised concerns about the dossier, due to Steele's intelligence gathering approaches — he gave money to intermediaries, who in turn paid sources for the information contained in the dossier. "Unless you know the sources, and unless you know how a particular source acquired a particular piece of information, you can't judge the information — you just can't," Morell said.

Trump Urges US Supreme Court Chief Justice for Action on Russia Dossier
Former UK Ambassador to Uzbekistan Craig Murray went even further in his criticism of the dossier — and Steele.

"Steele is a charlatan who knocked up a series of allegations that are either wildly improbable, or would need a high level source access he could not possibly get in today's Russia, or both. He told the Democrats what they wish to hear and his audience — who had and still have no motivation to look at it critically — paid him highly for it," Murray wrote in March 2018.

The reliability and value of Steele's sources is certainly questionable — while he spied in Moscow in the 1990s and may have been one of the UK's most senior intelligence officers in Russia as the Soviet Union collapsed, it's unknown what, if any, contacts he retained after leaving. He cannot travel to Russia himself.

The Skripal Case: Fifteen Facts and Some Logical Conclusions
It's been suggested by some sources that Sergei Skripal may have contributed to the dossier, or at least been used to lend the document a veneer of insider legitimacy. Steele certainly would've been able to access Skripal with some ease, given Pablo Miller, Skripal's MI6 recruiter, is — or until recently was — an employee of Steele's firm Orbis Business Intelligence, and lived nearby Skripal in Salisbury.

Attempts by Miller to distance himself from Skripal and Orbis Business Intelligence — supported by the UK government — have only added to such suspicions. In the days following Skirpal's poisoning on March 4, Miller deleted his LinkedIn — concurrently, The Daily Telegraph published an article referring to a "security consultant" employed by the company that compiled the Fusion GPS dossier on Donald Trump, "who lived close to Skripal and is understood to have known him for some time," and had deleted his LinkedIn.

While the article declined to mention the security consultant's name, their description is precisely applicable to Miller. The same day as The Telegraph article was published, the UK government issued a D-notice that likewise could easily apply to Miller.

D-Notice, Parallels to Syrian War Raise Questions in Skripal Case
"The issue surrounding the identity of former MI6 informer Sergei Skripal is already widely available in the public domain. However, the identities of intelligence agency personnel associated with Sergei Skripal are not yet widely available in the public domain. The provisions of DSMA Notice 05 therefore apply to these identities. If any editor is currently considering publication of such material, may I ask you to seek [the] advice [of the Defense and Security Media Advisory Committee] before doing so?" the government wrote to all major media outlets.

The D-notice may account for why no references to Miller have been made by mainstream news organizations in the months since.