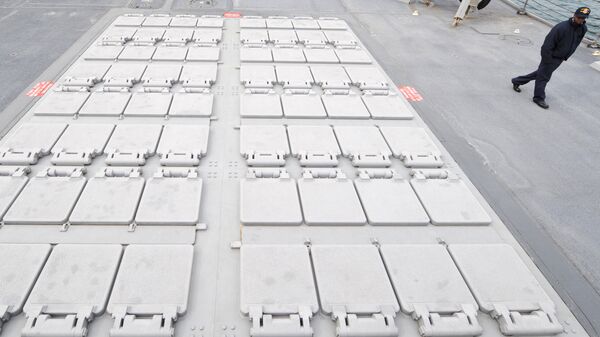 The United States started deploying Aegis Ashore missile defense systems, as well as MK-41 Vertical Launching Systems tubes that could be used to launch intermediate-range cruise missiles in Europe in June, according to the Russian Foreign Ministry.

Deployment of the US Mk-41 launching systems in Romania and Poland contradicts the Intermediate-Range Nuclear Forces (INF) Treaty, Vladimir Ermakov, the head of the Russian Foreign Ministry's Department for Nonproliferation and Arms Control, stated.

"There are also serious questions regarding the actions of our American colleagues that are contrary to the INF Treaty, including the ground-based deployment of universal Mk-41 launchers in Romania and Poland," said Head of the Russian Foreign Ministry's Department for Nonproliferation and Arms Control Vladimir Ermakov during a general debate in the First Committee of the UN General Assembly.

He noted that Russia as a responsible and consistent supporter of the nuclear disarmament process for over 50 years has made a large-scale contribution to the reduction of strategic offensive weapons, and on February 5, 2018, Russia reached the maximum levels of carriers and warheads under the Russian-American START Treaty, as a result of which Russia's nuclear arsenal has been reduced by more than 85% compared to the peak of the Cold War.

US Threat of Preemptive Strike on Russia ‘Impossible to Take Seriously’
In May, US President Donald Trump accused Russia of allegedly violating the INF Treaty and ordered US Secretary of State Mike Pompeo to propose new sanctions against Russia in connection with these breaches. The Kremlin responded by saying that Russia had never violated the agreement.