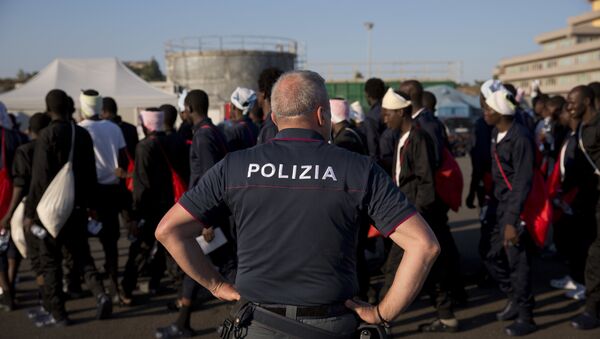 © AP Photo / Emilio Morenatti
Subscribe
International
India
Africa
Two Italian policemen detained a Gambian citizen, which led to them being encircled by a whole group of immigrants seeking to free him.

“There were 50 of them, against the two of us. Nevertheless, we managed to ultimately handcuff him,”  the officers recalled, as reported by Corriere della Sera.

The policemen who spoke on the condition of anonymity serve in the traffic control department in the Italian city of Cerignola.

On the evening of October 5, just outside Borgo Mezanone, which is 15 kilometers away from the regional center, Foggia, the law enforcement officers were encircled and attacked, opposite a large migrant center [the third biggest one in Italy].

'Smell of Blood Remained for Months': Afghanis on US' Kunduz Hospital Attack
According to the Italian media, dozens of refugees went to great lengths to wrest 26 year-old Gambian Omar Jallow from the policemen’s grasp. Jallow had already been convicted for a number of crimes. The policemen first had to chase the offender in a patrol car and then run deep into the “ghetto” to catch him.

This is how they described the incident to Giuseppe Vigilante, a local secretary for the autonomous police labor union:

“We kept order in the town streets in the afternoon. At some point, I raised the baton to stop one of the cars passing by. There was a Gambian inside, who pressed the accelerator instead of pulling over, trying to hit us. In the chase, the driver also resorted to a battering ram, attempting to push us into the ditch.”

They went on to say that when he left his car not far from the migrant center he tried to run away, prompting them to chase him on foot. When the other immigrants joined in, they “punched and kicked us, threw stones and bottles at us.” We were fortunate to pass on a walkie-talkie signal to call for backup. After four other patrol cars arrived the assailants fled the scene.

The policemen sustained injuries and sough medical assistance, one even sustained a broken nasal septum, which doctors say will take about 30 days to cure.

The Gambian is currently being held in a detention center and has been charged with inflicting bodily harm and resisting arrest.

“The migration center Borgo Mezanone has virtually turned into a ghetto, some sort of a town in a town.  It was supposed to house 200 people, but there are over 600 people there now. On top of it, the location where the airport at some point was, is full of barracks, housing thousands of immigrants. There are car thieves, drug dealers and etc. among the locals. It is increasingly difficult for us to get into those districts, taking into account the means that we have at out disposal, ” Giuseppe Vigilante pointed out.

“If something opposite had taken place, everyone would publicly point to racism; while these incidents do not attract much attention,” Francesco Pulli, national secretary for the autonomous police trade union, said.

“The idea that they will get away with it push offenders to act like this. This is wrong. Anyone breaching the law must take responsibility. We must stand on guard for our policemen’s lives and health, ” he added.