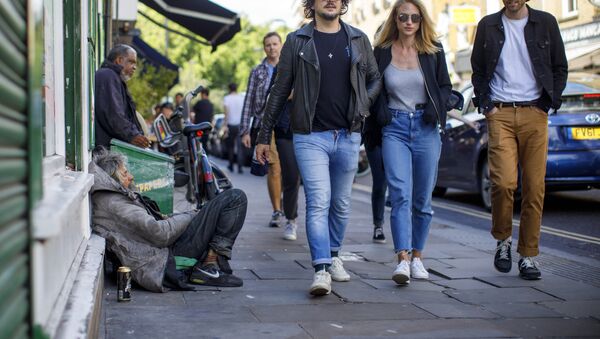 Britain is the sixth richest country in the world however increasing numbers of people are becoming homeless and forced to live on the street where many of them end up dead.

At least 449 homeless people have died in the UK in the last year in what's been called a "national scandal". An investigation by the Bureau of Investigative Journalism discovered the majority of deaths were men, aged between 18 and 94. The causes of death included suicide, assault, illnesses and drug overdoses. In some cases, people starved to death.

Howard Sinclair, chief executive of homeless charity St Mungo's told the bureau: "These figures are nothing short of a national scandal. These deaths are premature and preventable."

At least 449 people have died homeless in the UK in the last year (Oct 2017-18). This includes a father of two, an avid gardener, a quantum physicist, a 19 year old and an 81 year old man sleeping rough #makethemcount pic.twitter.com/B0hVqyWHej

Of the 449 homeless deaths we counted, the average age of death was 49 for men and 53 for women. Crisis research has found #homeless people are twice as likely to die from infections and heart attacks, and nine times more likely to commit suicide. #MakeThemCount pic.twitter.com/EIkZYu1EZ3

​The British government says it is spending US$1.5 billion to tackle homelessness with the intention of ending rough sleeping by 2027.

This is a national scandal caused by Govt austerity. 15 people died homeless in Brighton last year.@theresa_may's pledge to let councils build social housing again is welcome — but it's going to take more than that to end homelessness and hardship.https://t.co/xtyye3waqD https://t.co/5VyvOytSgl

​Britain's TV station Channel 4 broadcast a report detailing the deaths of people living on the street, prompting a response from Housing Secretary James Brokenshire: "The report you ran in relation to those who are dying on our streets is utterly shocking and does not reflect the modern Britain that we need to be."

"The report you ran in relation to those who are dying on our streets is utterly shocking and does not reflect the modern Britain that we need to be."

Housing Secretary James Brokenshire responds to our report on the number of homeless deaths in Britain within the last year. pic.twitter.com/oxMTWS69aB

​World Homeless Day is marked on 10th October every year, in the hope the global issue is talked about locally.

Hospitals, Jobcentres & prisons now have a duty to notify local authorities when they think someone may be homeless or at risk of homelessness. Could this lead to a coordinated approach to preventing homelessness? Blog via @ChrisBrillHL https://t.co/sgfg0DlHBY

​Britain's Prime Minister Theresa May told the House of Commons: "We want to ensure rough sleeping becomes a thing of the past."

There's definitely an election looming. All these caring words for suicides and homeless people is entirely out of tory character. #PMQs

​Meanwhile the number of women with children sleeping rough has almost doubled, according to newspaper The Independent which has seen research carried out by housing charity, Shelter.

My exclusive: Number of single homeless mothers soars to highest level since financial crash. Thanks to @Shelter for the figures https://t.co/mzcPa5TOTY pic.twitter.com/zmahWfjzxU

​Shelter's chief executive Polly Neate told The Independent the charity is "deeply concerned by the rising number of single parents — the vast majority of whom are women — being tipped into homelessness."

The government's official statistics body, the Office for National Statistics (ONS) has announced it will work on counting the number of homeless deaths following the investigation.

The @ONS will now compile its own official count of rough sleeper deaths after an investigation from @TBIJ revealed 449 people died on the streets last year https://t.co/mnDnwVJaZI

​A report published by the Public Accounts Committee in December 2017 found there were almost 10,000 rough sleepers in England and 78,000 families living in temporary accommodation.

A shortage of housing options has left homeless people at risk, according to the cross party committee of MPs who say the issue in England is a "national crisis."

Under UK law, homelessness includes people living rough, single people staying in hostels and those in temporary accommodation. Around 120,000 children don't have a permanent home, the report says.

READ MORE: The Big Issue as 25: Co-Founder of UK's Homeless Magazine Tells All to Sputnik

The department accepted it had failed to tackle the rise in homelessness and lack of affordable housing due to is "light touch approach". The department is working to halve rough sleeping by 2022 and abolish it completely by 2027.