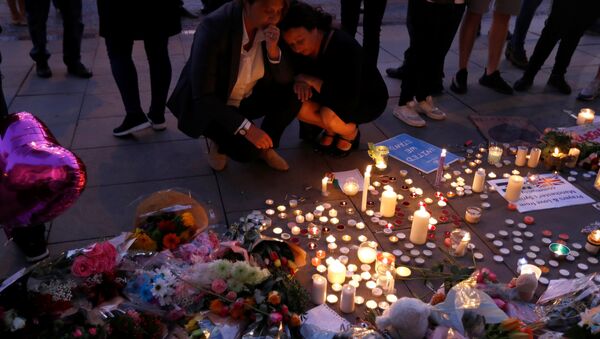 © REUTERS / Peter Nicholls
Subscribe
WASHINGTON (Sputnik) - Four FBI employees have broken rules put in place by the agency and the Department of Justice (DOJ) by leaking intelligence on the 2017 bombing in Manchester, the US Office of the Inspector General (OIG) said in a new report released on Wednesday.

“The OIG investigation found that some FBI personnel forwarded the UK Intelligence Report to non-government e-mail accounts but the investigation did not identify evidence that any of these individuals provided the report to the NYT,” the report said, referring to the New York Times newspaper, which published a news report based on leaked intelligence. “The OIG substantiated the following violations of DOJ and FBI computer rules of behavior and FBI policy by the following four individuals in connection with their handling of the UK Intelligence Report.”

The OIG explained that two FBI personnel deliberately sent the e-mail with the UK Intelligence Report to their personal, non-government e-mail accounts, stressing, however, that the OIG did not find evidence that any of these employees later forwarded the report to the newspaper.

“A task force officer assigned to the FBI forwarded the UK Intelligence Report to a foreign law enforcement partner without obtaining FBI permission to do so, and transmitted the report without including all of the relevant instructions restricting further distribution of the report,” the report said.

According to the OIG, a fourth FBI employee had set an unauthorized auto-forward of the FBI email to the employee’s personal e-mail account in violation of FBI policy; however, internal FBI e-mail filters prevented the delivery of the UK Intelligence Report and most other FBI e-mails from being forwarded automatically.

The OIG said in its report that the probe was launched following The New York Times' publication of a report which included unclassified data “that was sensitive, non-public, and derived from a UK intelligence report” on the Manchester attack.

“The FBI referral and the UK Intelligence Report itself indicated that a UK government agency had disseminated the report by e-mail to numerous other US federal agencies, as well as to many foreign law enforcement agencies,” it noted. “The OIG determined that the FBI initially further disseminated the UK Intelligence Report to over 1,000 unique recipients, including to offices at FBI headquarters, Joint Terrorism Task Force members, and other federal agency partners … We found that some of those recipients appropriately disseminated the report further to other FBI employees and to FBI law enforcement partners.”

The OIG pointed out that such wide circulation made it more difficult to identify the person behind the leak of the report, as the OIG can only review the actions of DOJ and FBI employees, as well as non-FBI employees assigned to FBI task forces.

“Upon referring the matter to the OIG, the FBI informed the OIG that it had analyzed FBI e-mail records, internal text messages, and FBI telephone logs, but found no contacts with the telephone numbers or e-mail addresses known to be associated with the attributed author of the NYT article,” the report noted.

The United Kingdom faced a number of terror attacks in 2017, most notably the attack on London's Westminster Bridge and parliament grounds in March, and a concert bombing in Manchester on May 22, the latter of which claimed the lives of at least 22 people and wounded almost 120 others.