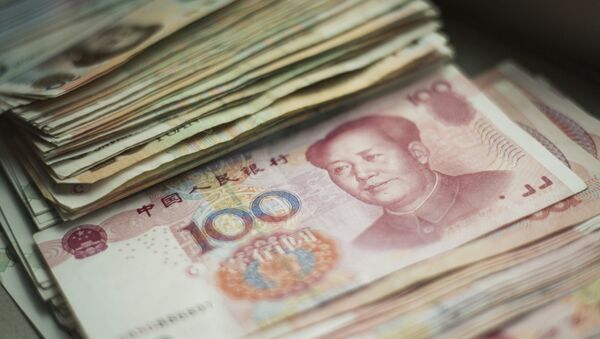 Regardless of how severely Donald Trump rebuked China over manipulating the yuan rates to level out the negative consequences of the tariffs for exporters, the weakening of the Chinese currency, as well as of other developing countries, is directly linked to the US’ own actions.

The American economy is on a steady rise, along with Donald Trump recently introducing a tax reform which helped to free up additional capital. These are the conditions that could threaten with the economy overheating, and regulators naturally raise interest rates to avoid such negative effects. So as to battle the rates’ corrections, other countries have to symmetrically raise their interest rates, which is not always possible.

China to Sell Armed Drones to Pakistan to Take on India's S-400 - Analyst
China cannot increase its interest rates, as amid the trade war with the US, the economy might slow down, whereas stricter monetary policies might altogether stifle business activity and growth. The same can be said about Turkey, Indonesia and even Russia, where the Central Bank increased interest rates, which helped in the short term, but left few opportunities for maneuver in the long run.

Meanwhile, China, for instance, remains the biggest importer of energy resources, while their prices are denominated in dollars, which, because of the weaker yuan, makes the energy resources for China more costly. Another example is India, where a vast part of the population is involved in agriculture. The strengthening of the dollar leads to a surge in diesel prices, which is something Indian farmers are already complaining about. Even Russia experienced the effect: ruble rates with regard to the dollar are too low, taking into account the current oil price tags.

The trouble is that for developing countries, the devaluation of national currencies carries as much risk as increase in interest rates, as both may halt economic growth. This is the reason why the term “de-dollarization” is increasingly gaining popularity now. Even the EU is indignant over the fact that the world’s most essential resources are nominated in dollars. President of the European Commission Jean-Claude Juncker billed it “absurd that Europe pays for 80 per cent of its energy import bill — worth €300 billion a year — in US dollars when only roughly 2 per cent of our energy imports come from the United States.” “It is absurd that European companies buy European aircraft for dollars, not euros,” Juncker stated.

“China’s State management for currency control has found that citizens are permitted to annually buy currencies worth no more than 50,000 US dollars, and this applies to purchases of any foreign currency. So, all currency operations are automatically denominated in dollars, thereby reinforcing its status. Why not, for instance, denominate these currency limitations in yuans? Say, one would be permitted to purchase currencies not for a maximum of 50,000 US dollars, but for 350,000 yuans?”

China is certainly doing its best to ditch the dollar in international transactions. The second biggest economy notably launched its own oil futures, denominated in yuans. But it is not immediately clear whether the volume of business deals involving them will be sufficient to fully substitute for the current Brent WTI.

Russia fully backs China’s bid for de-dollarization. In 2014, the countries clinched and further prolonged an agreement on yuan-ruble currency swaps for a staggering 150 billion yuans, which is equal to 1.5 trillion rubles. By doing so, both nations obtained access to liquidity in the other country’s currency, having no need to purchase it in currency markets.

Citing Tariff Battle, IMF Predicts Slower Growth in US, China
However, the scheme works solely between countries with a considerable and, most importantly, balanced goods turnover. “Otherwise, some party will have a foreign currency in excess, which nobody knows where to use it. De-dollarization opponents see this problem as the main argument,” Zhang Ning said. “In the case of one party forcing some currency upon the other party to perform estimates, it, fairly enough, shoulders the responsibility for all the risks that the rate volatility carries, which further increases transaction expenses,” he noted, adding that it’s hardly possible to quickly dump the dollar in currency estimates, although in the long run, a smooth transition is necessary.

“I consider this to be a rather reasonable plan. For instance, China, which seeks to translate trade of oil and oil products into national currencies, has launched yuan oil futures. However, prices for most commodities in international trade are still denominated in dollars. This is a lengthy, transitional process that requires alternative currencies to grow and boost their value and influence in developing markets and the development of their economies. This can’t be achieved overnight,” the scholar concluded.

Views and opinions expressed in this article are those of Zhang Ning and do not necessarily reflect those of Sputnik.