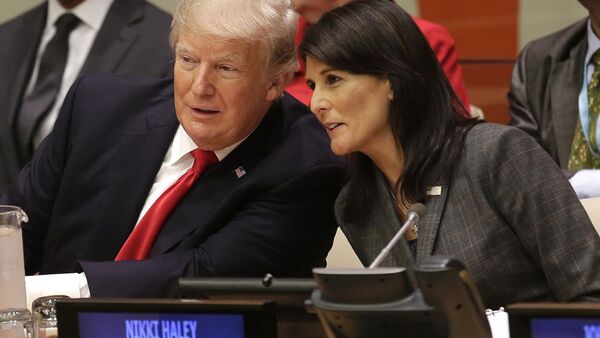 © AP Photo / Seth Wenig
Subscribe
US President Donald Trump said Tuesday that US Ambassador to the United Nations Nikki Haley would leave her post at the end of 2018.

"So at the end of the year, Nikki will be leaving and we'll be in constant touch, I know that," Trump told reporters in the Oval Office while meeting with Haley.

However, the US president expressed hope that Haley would come back in a different role. Haley thanked the president for allowing her the "honor of a lifetime" to serve as UN ambassador.

READ MORE: Nikki Haley Says She Won't Be Running For White House in 2020

Trump continued by saying that his team had a number of people who would like to take the job of US envoy to the UN, adding that he would name Haley's successor within two or three weeks.

Rosenstein Hasn't Resigned, Will Meet Trump on Thursday - Reports
Earlier in the day, two sources with knowledge of the conversation between Trump and Haley told the online news portal Axios that the president had accepted Haley’s resignation, but the precise time of her departure is still unclear.

Following the reports, the White House announced that the UN ambassador was set to meet with US President Donald Trump in the Oval Office at 10:30 AM (14:30 GMT), adding that it would be open to the press. The US president, in turn, has turned to Twitter to announce the upcoming event.

Big announcement with my friend Ambassador Nikki Haley in the Oval Office at 10:30am.

Nikki Haley has served as the 29th United States ambassador to the United Nations since 2017. Before being appointed to the office, she served as governor of South Carolina.