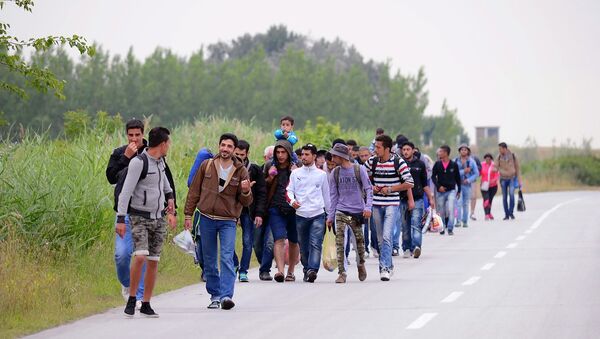 WARSAW (Sputnik) – Polish Interior Minister Joachim Brudzinsk on Tuesday said that Warsaw should not approve the UN migration deal and regarded the pact as a threat to the national security.

The Global Compact for Safe, Orderly and Regular Migration is set to be formally adopted at a UN conference in Morocco on December 10-11. Though the treaty is not legally binding, some countries have expressed concerns that the compact could promote the facilitation of border crossing procedures.

"The UN migration agreement is not in line with the priorities of the Polish government, which are ensuring security of Polish citizens and maintaining control over the migration flows," Brudzinski said during a meeting of the G6 interior ministers in Lyon, as quoted by the Interior Ministry’s Twitter account.

Red Cross Offers to Use Humanitarian Law to Tackle EU Migration Issue
From the minister’s point of view, the draft UN migration deal does not ensure security for Poland as well as may stimulate the undocumented migration.

"I will give recommendations to Prime Minister Mateusz Morawiecki not to sign the Global Compact agreement, which is going to be adopted in Marrakesh in December," Brudzinski added.

European countries have been experiencing a large-scale migration crisis since 2015 due to the influx of thousands of people fleeing crises in the Middle East and North Africa.