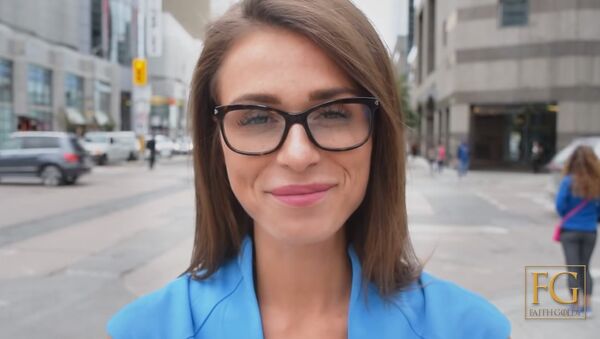 Faith Goldy, a Canadian political commentator who covered the 2017 Unite the Right rally in Charlottesville, Virginia for Rebel Media, has been consistently slammed for her right-wing views, including fierce opposition to illegal immigration into Canada. As a candidate for Toronto mayor, she has vowed to reinstate the Toronto Anti-Violence Intervention Strategy (TAVIS) and wants to earmark affordable housing for millennial residents of the city as well as to refuse the inflow of new illegal immigrants into the country's biggest city.

Goldy has sued the broadcaster Bell Media over a refusal to air her campaign ads, stating the company had violated her constitutional right to freely express herself as a registered candidate.

Sputnik: Let's talk about that lawsuit regarding campaign ads. How is your campaign going? It's less than two weeks before the election, and it does not seem to be going well for you. What is happening?

Faith Goldy: The campaign is going fabulously on our account. We're making it very clear: we're not just running against the 34 candidates, we are also running against the entirety of the mainstream media and the political establishment, and, as of today, I have filed a lawsuit against one of the biggest media conglomerates in the entire country. These are people who have for no reason told me that my ads are banned on television. It violates our fair elections [principle], one of the pillars of our democracy, and my charter of protected right for freedom of expression. We're not letting these power-thirsty globalists, anti-nationalists, set the agenda here. We are ensuring that a precedent is not set here by standing up to these wolves who seek to steal the rights away from the flock in this nation. We've hired one of the best lawyers in the entire country to represent us, because, of course, I am a first-class candidate, and I will have the first-class legal things.

​Sputnik: Faith, you had several incidents during the campaign when people who called themselves Antifa attacked you at the border. You have a tough stance on migration. Have any of these people been punished or questioned during the period?

Faith Goldy: Antifa hates me, because my message resonates with folks at home, and they don't like the fact that people are quite happy with the border we now have. People are quite happy for their tax money going towards helping our own before we become the boarding shelter and the abuse shelter to the world. As for my assaulters and assailants, as I have last heard from Quebec police, they issued the arrest [warrant] on at least one of the perpetrators. I'm not sure whether the arrest has been closed; I'm not sure that's happened to date. 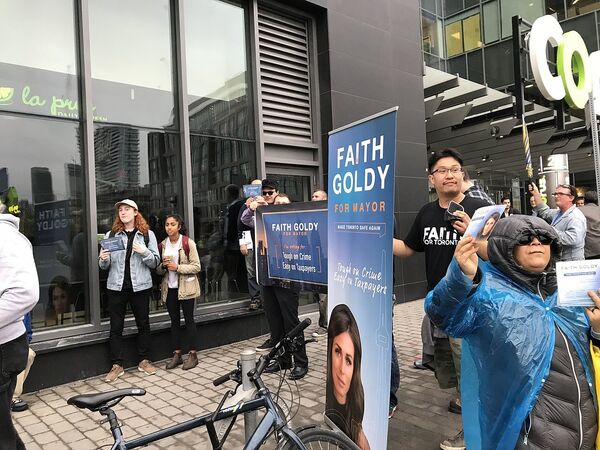 Sputnik: Toronto is in the news today internationally for what is happening at one of its hotels, what the US independent media has called complaints from the visitors about the so-called refugees. What is happening, and how is that policy of cultural enrichment playing out for Toronto? What are you going to do about it as a mayor?

Faith Goldy: Before I entered the world of politics, I was very accomplished at investigative reporting, and it was actually me who first broke this story. I've [unearthed] the illegal revolving back door into Canada at our southern border, which is the longest undefended border in the world, which we share, of course, with the United States. Our self-professed "feminist" and "globalist" prime minister invited the entire world to describe themselves as refugees and then illegally cross our legitimate border to enter Canada, and, in a 30-day period, they are [provided] with [the] full social security and benefits package which we have in this country, which, of course, includes our gold-plated healthcare system. So I broke this story, and when I did, people called me Islamophobe and racist; but of course it makes it into the international news, because the migrant crisis has become so bad in Canada. But our mayor got actually in cahoots with our Prime Minister Justin Trudeau by declaring Toronto a sanctuary city, and if you can believe it, these illegal border jumpers are actually given the options, once they illegally get into our country of where they wanna go! Well they [have] all heard of Toronto, so they all come here.

Toronto Mayor Calls for Stricter Gun Control After Deadly Mass Shooting
Meanwhile, we have a homeless crisis out of control — guys who can't find a shelter bed, while the majority of shelter beds in our city are being occupied by criminals, by illegal border jumpers. So the day I get elected the mayor of the once-great city of Toronto, we are going to evacuate every last one of the criminals, of these illegal border crossers; we are going to pass them to the next nearest jurisdiction, and if they don't want them, then we are going to pass them to the front lawn of the prime minister's office — and this is not a joke. We are going to make sure that Toronto taxpayers' voics are actually heard, and let me tell you, that [when we were going] door to door, they made themselves very clear — and that [was] not only the old Canadians. New Canadians and the legal immigrants alike said that it is time to shut the door closed for illegal migration. We will be welcoming to everyone except for the criminals. So that's what we're gonna do: make sure they all get evacuated so that beds get free for actual homeless, for people in need, who actually belong here and who are law-abiding citizens.

The views and opinions expressed in this article by Faith Goldy are solely those of the speaker and do not necessarily reflect Sputnik's position.

000000
Popular comments
Well well, finally a politician in Canada that has the guts too speak up. Were is the rest of those freeloaders to speak up for or against. Like in the USA we are having difficulty with just about all our politicians (lawyers) who cannot comprehend the difference between legal and welcome immigrants and the illegal border jumpers that are NOT welcome. Do what all previous legal immigrants did and go to the nearest Canadian embassy and pick up an application for LEGAL migration to Canada.

siberianhusky
10 October 2018, 02:00 GMT2
000000
Canada is seeing a big jump in folks running away from Trump's policies. Unfortunately the majority do not qualify for residence and are deported. Canada deported 15000 illegal immigrants last year.