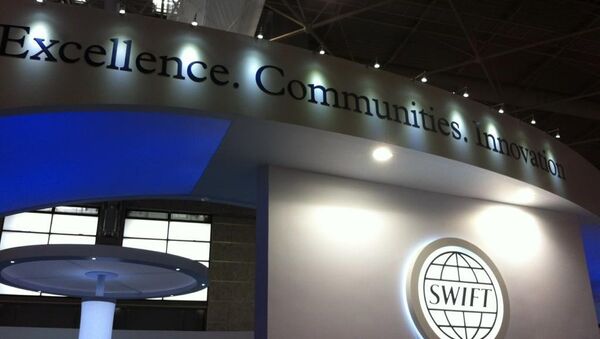 © Photo : https://twitter.com/swiftcommunity/
Subscribe
Washington’s sanctions against Tehran would fundamentally change other countries’ economic cooperation with the Islamic Republic, the Financial Times has written.

EU finance ministers will try to persuade the US administration not to disconnect Iran from the international payment system SWIFT, the newspaper reported on Tuesday.

SWIFT is a global financial messaging service that connects more than 11,000 banks in more than 200 countries.

“Our ask is: why bother ripping out all of the electrical cables from a building if you can switch off a light,” said a European diplomat who confirmed the planned meetings.“If you can designate a bank [for sanctions] then there’s no need to force Swift to disconnect from Iran,” he added.

According to the newspaper, this is the issue the EU finance ministers are going to bring up when they meet their US counterpart Steven Mnuchin at the annual IMF and World Bank gathering in Indonesia, scheduled to run until October 14.

US Lawmakers Urge Treasury Dept. to Cut Off Iran From SWIFT - Letter
Earlier, US Secretary of State Michael Pompeo said that the forthcoming US sanctions against Tehran would fundamentally change other countries’ economic cooperation with Iran.

He failed to clarify, however, whether Washington would punish the management of the SWIFT payment system if it keeps working with Iranian banks.

“I don’t know the decision with respect to SWIFT in particular. There are still a number of decisions pending before the November 1 deadline,” Pompeo told a September 17 news briefing.

France, Germany and the UK, all of them signatories to the 2015 nuclear deal with Iran, which the US withdrew from in May, are “frustrated that they have not been able to convince the Trump administration to take a softer line on Belgium-based SWIFT,” the newspaper wrote.

The remaining signatories to the agreement — Russia, Britain, Germany, France and China — remain committed to the deal.

The European Union has activated the so-called “blocking statute,” which declares US sanctions void on EU territory and prohibits European companies from abiding by them.

000000
Popular comments
The US isn't going to let the SWIFT help Iran in any way, they are set on destrucion of another country.
Shadowlady8
9 October 2018, 16:04 GMT
000000
The Eu have still not understood the Usa terror state !!! there are to dumb to understand so Iran will be out of the Swift banking system !!!! Why to discus this with the Usa :(:(:(