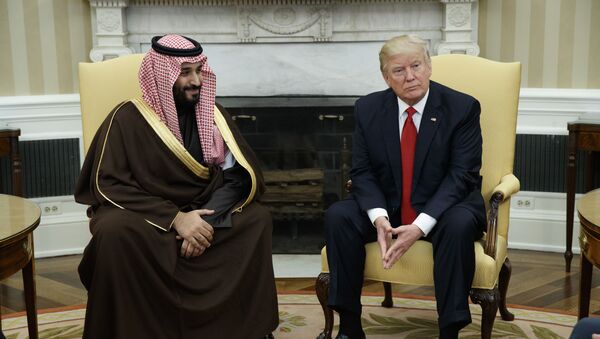 Finian Cunningham
All materials
The macabre case of a missing Saudi journalist is prompting speculation within the US political establishment about a historic parting of ways between Washington and Saudi Arabia.

It’s not clear yet what actually happened Jamal Khashoggi, a 59-year-old prominent commentator who worked for the Washington Post, among other major news outlets. He has been missing for almost a week after he entered the Saudi consulate in Istanbul, Turkey, on October 2.

Turkish police have launched a murder inquiry, on the suspicion that he was killed inside the consulate building. If confirmed, the case is a shocking violation of international law and norms of human decency.

Saudi authorities deny any wrongdoing. They say Khashoggi left the building on the same day he arrived. And Riyadh has invited Turkish authorities and media to inspect the premises.

Nevertheless, the Saudi authorities are implicated in responsibility for accounting for the whereabouts of the dissident journalist.

Turkish Police Believe Disappeared Saudi Journalist Killed - Reports
What makes the case all the more perplexing is that Jamal Khashoggi was once closely connected to the House of Saud royal court, having served as a media advisor to top Saudi rulers.

More recently, he had gone into self-imposed exile, writing articles for US media in which he voiced critical views – albeit mildly worded – of the Saudi rulers and policies.

Khashoggi went to the Saudi consulate in Istanbul last week to obtain routine documents he required for an intended marriage. He reportedly told his fiancée he feared being detained. It was her phone call that alerted Turkish authorities to his disappearance.

The disappearance of Saudi dissidents is nothing new. Thousands of political opponents and human rights activists end up in Saudi jails. Some of them like female activist Israa al Ghomgham are facing execution by decapitation.

But the Saudi rulers appear to have broken the limits this time in the case of Jamal Khashoggi. If the journalist was killed – and we still don’t know yet of his fate – then that would be politically explosive, because of his international profile and in particular his association with the Washington Post.

The newspaper published an editorial earlier this week demanding answers over the disappearance, and urged the Trump administration to “suspend military cooperation” with Saudi Arabia, if it is confirmed that Khashoggi was indeed murdered.

In another Post article, it was posited: "This could be the moment Saudi Arabia loses Washington."

Saudi Crown Prince on Trump: 'I Love Working With Him' Despite Criticism
Other senior Washington pundits have denounced the alleged murder as a "monstrous outrage" which should compel the US government to fundamentally review its strategic alliance with the oil-rich kingdom.

The conjecture over Washington parting ways with Saudi Arabia seems to have a growing momentum among US analysts.

Last week, President Trump made highly derogatory comments about the Saudi royals in which he demanded they "pay for our military protection". Trump fulminated the House of Saud "wouldn't last two weeks without our military support".

READ MORE: Saudi Arabia to Trump: Riyadh 'Will Pay Nothing' to US for Its Security

There has also been mounting concern in the US Congress about the Saudi military operation in Yemen. The US is implicated in war crimes because of its vital military support for Riyadh.

Long & Strange Trip: US Shielding al-Qaeda 17 Years After 9/11 Attacks
Then there is the backdrop of the 9/11 terror attacks on New York in 2001 in which Saudi rulers have long been suspected of having at least a tangential role from sponsoring the jihadists involved in that incident, which led to some 3,000 deaths among American civilians. That atrocity has served to sour US-Saudi relations among lawmakers, pundits and public.

So, is a decisive rupture in US-Saudi relations on the cards, prompted by the latest apparent murder of a Washington-connected Saudi journalist?

Despite the recent outcry, the chances of such a breakdown in bilateral US-Saudi relations are negligible. Simply put, the American ruling class needs the despotic House of Saud as much as the latter needs US patronage. It's a strategic axis that is inviolable.

Trump may harrumph about the Saudis needing to pay for military protection, but US imperialist planners know all too well that American hegemonic ambitions in the oil-rich Middle East are totally dependent on Washington ensuring that the House of Saud remains propped up.

That's partly because of the decades-old petrodollar system worked out between the US and Saudi Arabia in which the world's top oil producer swore to always nominate the dollar as the currency for global energy trade. If the petrodollar system were to collapse, from say a political implosion of Saudi Arabia, then the American economy would also crash.

Washington, as Trump seems to misunderstand, is not giving military protection to Saudi Arabia as some kind of benevolent act of kindness. American military power shoring up the Saudi monarchs is a necessary linchpin for US geopolitical survival.

READ MORE: Trump to Saudi King: 'You Might Not Be There for Two Weeks Without Us'

The American "protection racket" — for that's what it is — also comes with the added incentive of gargantuan weapons sales to the Saudis. Just last year, Trump and the de facto ruler of Saudi Arabia, the 33-year-old Crown Prince Mohammed bin Salman, signed an arms deal worth over $100 billion. This racket is essential for US capitalism and its systematic dependence on a military-industrial complex to ever be abandoned.

Another crucial role played by the Saudis for US imperialism is that the kingdom has long bankrolled CIA black operations around the world, which is a neat way for highly criminal American activities of subversion and regime-change wars to avoid political oversight by Congress.

All in all, US global power is dependent on maintaining the despotism of Saudi rulers intact.

No purported strategic realignment is possible under existing conditions and imperatives of American corporate capitalism and its imperialist function in the Middle East or beyond.

The latest shocking incident of a Saudi journalist apparently being lured to his death in a Saudi consulate is an appalling wake-up call of lawlessness and barbarity.

American media are no doubt jolted by the brutalism and apparent flouting of international law. But calls for a substantial change in US-Saudi relations are delusional. Because such calls fail to understand the real, heinous nature of US power and how it operates in the world.

As in Yemen and towards individual dissidents, Saudi rulers are allowed to get away with murder because Washington relies on this very ruthlessness for its own imperialist objectives.