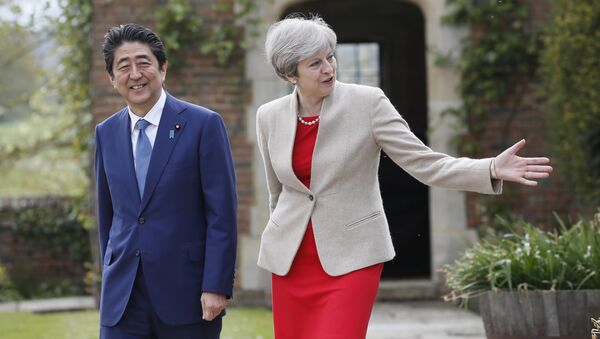 Despite the dangers of a no-deal Brexit, Japan's prime minister expressed optimism on Friday about new trading prospects for the United Kingdom via the 'new' Trans-Pacific Partnership as a potential conduit for economic cooperation.

Despite losing its position as a conduit to Europe after Brexit, the UK would still be a country "equipped with global strength" and welcomed into the Trans-Pacific Partnership (TPP) with 'open arms' after leaving the EU, Japanese prime minister Shinzo Abe told the Financial Times on Friday.

"I hope that both sides can contribute their wisdom and at least avoid a so-called disorderly Brexit," Abe said, adding that a transitional period was vital for Japanese companies and hoping that "the negative impact of Brexit to the global economy, including Japanese businesses" would be minimized.

Abe's comments offer the UK fresh prospects for trade deals outside the EU single market, which it is set to leave in March 2019. Britain can only join the TPP if it leaves the EU bloc and sets its own tariffs, the BBC reported.

To date, over 800 Japanese businesses employing 100,000 people operate in the United Kingdom. However, electronics giant Panasonic stated it would relocate its headquarters from Bracknell to Amsterdam and Nissan stated that there would be 'serious' consequences for a no-deal Brexit.

The TPP was a trade deal inked between 12 countries, including Canada, Australia, Japan, Malaysia, and Mexico and the United States. However, the US withdrew from the agreement in January 2017, forcing the remaining participants to continue under the Comprehensive and Progressive Agreement for Trans-Pacific Partnership (CPTPP or TPP-11).

The UK's could potentially fill this vacuum alongside other global powers such as China if handled with care and finesse. There are many viable opportunities the UK could strike after leaving the EU, which rely on the competence of British leaders and multilateral trading strategy set hereafter.

Sputnik spoke with Independent MEP Janice Atkinson in July on a possible no-deal scenario, who asserted that most of the world will trade outside the EU, with "93% in 10 years' time". Atkinson's observations coincide with Shinzo Abe's comments, stating that Australia and New Zealand were also interested in having the United Kingdom join the Transpacific Partnership in order to trade with Japan under lower tariff schemes.

READ MORE: Independent MEP: 'We've Got to Be Big and Bold and Not Fear a No Deal Brexit'

She also commented on the immense opportunities to trade with the 53 member-strong Commonwealth, which would free the UK from EU regulations and trade quotas. She also stated that the EU would probably return to the negotiating table with a revised comprehensive free trade agreement, adding that the UK would miss a ‘wasted opportunity' to trade on liberal policies.

At the 2018 UKIP conference in Birmingham in late September, party leader Gerard Batten proposed a 20-year program to expand manufacturing to nearly £90 billion via a Commonwealth Free Trade Agreement, using World Trade Organization (WTO) rules and regulations, citing a massive £96 billion trade gap with the EU since in 2016.

To promote such initiatives, the Birmingham City Council plans to "showcase the entire country as a destination for international trade, education and tourism" after winning a bid to host the 2022 Commonwealth Games, a spokesperson told Sputnik in October. Birmingham would use the Games as a platform to host a future business Expo to attract Commonwealth delegates and businesses from key markets across the world, in addition to the USA, Middle East, Europe and China.

British and Chinese officials also discussed opportunities for post-Brexit trade after a culturally awkward UK foreign secretary Jeremy Hunt met with his counterpart Wang Yi in Beijing in late July. However, things took a wrong turn a month later after a Royal Navy warship, the HMS Albion, made a 'faux pas' through the Xisha Islands in the South China Sea, infuriating Chinese officials and endangering future prospects for Sino-British cooperation.

British and Turkish leaders also met on September 13 for the 6th annual Turkey-UK Joint Economic and Trade Commission (JETCO) at the Foreign and Commonwealth Office in London to discuss future trade deals, including free trade zones for high-tech businesses in Turkey and which offered "special incentives to technology-based projects and companies" in the IT, informatics, and software sectors. Turkish trade minister Rushar Pekcan and British secretary of state for international trade Liam Fox also set a trade volume target at $20 billion to bolster nearly 200 major Turkish businesses operating within the UK.