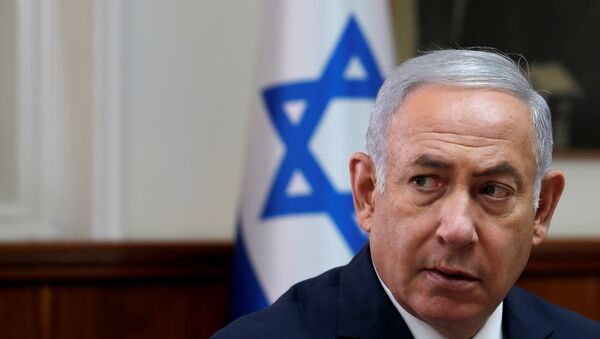 © REUTERS / Ronen Zvulun
Subscribe
A mandatory lecture speaker hinted that Netanyahu and Hitler were both guilty of genocide in what the university called a "provocative" presentation. According to the student that has made it public, this experience wasn't unique for her.

A Jewish student has shared a photo of what she called an "overtly anti-Semitic lecture" at University of Michigan, which has made waves on social media.

Alexa Smith wrote in a viral Facebook post that a contentious slide was displayed at a lecture as part of the Penny Stamps Speaker Series, a mandatory course for art students at her university. The slide in question features a phrase "guilty of genocide" written across the foreheads of Nazi leader Adolf Hitler and Israeli Prime Minister Benjamin Netanyahu, accompanied by a definition of genocide.

The lecture was given by graphic designer and artist Emroy Douglas, who has served as Minister of Culture for the Black Panther Party, a black militant political organization that reached its peak of activity in late 1960s.

A university official explained in a statement that the Stamps program is "intentionally provocative" and that the school doesn't control or censor the lectures. "Douglas covered a wide array of subject matter within the overarching context of his work, which looks at the oppression of people across the globe by governmental powers," he said, citing freedom of speech as a "bedrock principle of our academic community."

The post sparked a vigorous debate on social media, with some netizens insisting that the image was "anti-Semitic" and "atrocious."

One woman even admitted to have gone through a similar experience back at school.

However, some users leapt to the lecturer's defense and maintained that criticizing the Israeli government doesn't mean being anti-Semitic.

According to Alexa, this is not the first time the university, which is listed among the world's top 30 schools by the prestigious ARWU ranking, has made bold statements about the Jewish state. Two years ago, she claims, another Stamps speaker referred to Israel being a "terrorist state" and debarred Israeli soldiers the right of being called "actual human beings."

000000
Popular comments
. Netanyahu is surely guilty of genocides. There is no doubt about it.