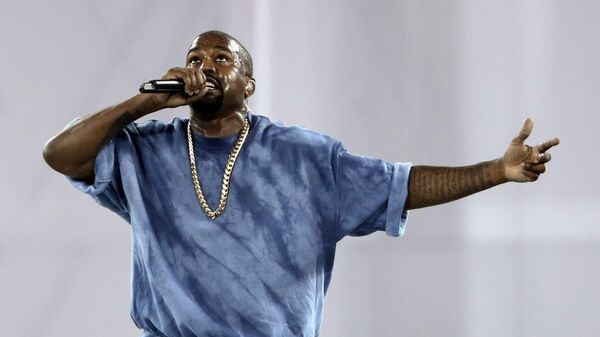 The rap star has been facing severe criticism over his political views, which he's expressed by wearing a red “Make America Great Again” hat and addressing Trump’s supporters.

West shut down his Twitter and Instagram on Sunday after he took a stand for Trump on America's long-running comedy skit show Saturday Night Live, where he gave a pro-Trump speech and a series of tweets in which he discussed abolishing the 13th Amendment, The Hill reported.

“Black man in America, supposed to keep what you’re feeling inside right now,” West said. “All those Democrats. You know, it’s like the plan they did, uh, to take their fathers out the home and promote welfare. Does anybody know about that? That’s a Democratic plan.”

West also said that SNL producers urged him not to wear the MAGA hat at the show, saying that they “bullied me backstage. They said, 'Don't go out there with that hat on.’”

“We need to have dialogue, not a diatribe,” West said, claiming that 90% of the news media, the TV industry, rappers, and musicians are liberal and pro-Democratic and “It’s easy to make it seem like it’s so, so, so one-sided.”

Viral
Rap Icon Kanye West Apologizes for Calling Slavery a 'Choice' After Backlash
One SNL cast member, Pete Davidson, slammed the rapper over his speech, claiming it was “one of the worst, most awkward things I've ever seen here.”

West also wrote on Twitter that he believes that the 13th Amendment is slavery in disguise and it should be abolished. “We will no longer outsource to other countries. We build factories here in America and create jobs. We will provide jobs for all who are free from prisons as we abolish the 13th amendment. Message sent with love,” he wrote. The Thirteenth Amendment to the United States Constitution abolished slavery in 1865 and granted enslaved African-Americans their freedom.

President Trump reportedly supported West. According to COS media, West was invited to the White House to meet with Trump on Thursday, October 11. The rapper told Hot 97 morning host Ebro that he would like to bring Colin Kaepernick with him to meet with Trump and “open dialogue” between them and asked Ebro to help to arrange the call, yet the host declined to assist with that.