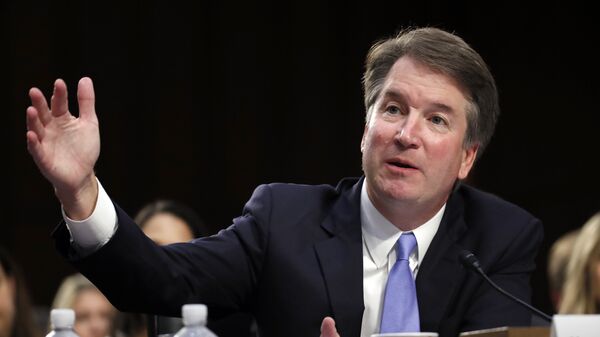 Sputnik spoke to Calvin Schermerhorn, a professor of history and associate director for undergraduate studies in the School of Historical, Philosophical, and Religious Studies at Arizona State University for insight on Brett Kavanaugh’s confirmation process and what possible impact his appointment could make.

Sputnik: What are your thoughts on Kavanaugh’s confirmation process?

Calvin Schermerhorn: From US history perspective, does it bear any parallels with other confirmations, if so what are they? The Kavanaugh nomination process is most like that of Clarence Thomas in 1991, which featured a partisan warrior who was thinly vetted and chosen because of his conservative credentials rather than his depth of experience. He was also accused of sexual harassment by a credible witness and complained of unfair treatment during the nomination process. Thomas was also confirmed narrowly and votes reliably with a Republican majority on the court, rolling back civil rights protections and empowering wealthy interests.

Democrats Will Fail If They Try to Impeach Kavanaugh - Legal Scholar
Sputnik: How long-lasting will be the impact of Kavanaugh’s life-time appointment and what will this impact be?

Calvin Schermerhorn: Kavanaugh is 53 and will likely serve for thirty years on the court, which will make him as influential as Thomas. Since 20 percent of Supreme Court cases have been decided by one vote over the last 30 years, Kavanaugh will ensure a reliable conservative majority on the Supreme Court.

Sputnik: Meanwhile, some Democrats are considering the possibility of impeaching Kavanaugh. How feasible is this option?

Calvin Schermerhorn: Were there similar precedents in the US history? Yes. In 1804, the party of Thomas Jefferson impeached two jurists including a Supreme Court Justice, Samuel Chase of Maryland. Chase was acquitted by the Senate and was not removed from the court. Democrats will not impeach Justice Kavanaugh since the likelihood of removing a justice is so dim. Democrats will instead fight other nominations and, if in a majority, could do what the Republicans did in 2016, which is refuse to confirm a nominee until a Democrat is elected president.

Sputnik: The scandal also comes ahead of mid-term elections. What is your take on the timing of the accusations against the judge?

Calvin Schermerhorn: The credible testimony of Dr. Blasey Ford is a chance for Democrats to stand up for women's rights. It comes after a series of powerful men have been forced to resign or face charges of sexual assault after a long history of Americans tolerating such behavior. The contrast between Republican defenses of the type of behavior Kavanaugh is charged with and Democrats' insisting on justice for women who are subject to sexual abuse offers voters a choice between a return to the status quo and a new era of change.

Trump Calls Democrats 'Too Dangerous' to Govern Amid Kavanaugh Confirmation
Sputnik: What do you think about the media coverage of the whole story and the ‘guilty until proven innocent’ approach?

Calvin Schermerhorn: The media coverage of the Kavanaugh confirmation was generally accurate. Some news organizations were more sympathetic to Kavanaugh's and others were sympathetic to his accuser. In the view of the U.S. Senate, Kavanaugh was not 'guilty until proven innocent' and senators tended to believe him over her. Women's advocacy groups tried to deliver the message that sexual assault is far more common than reported, and that women are generally not believed when reporting sexual violence. The fact that witnesses to this alleged assault were not called to testify indicates bias in favor of Kavanaugh, and his vehement denials were infused with partisan anger. This nomination has hurt the process and will diminish the prestige of the Supreme Court.