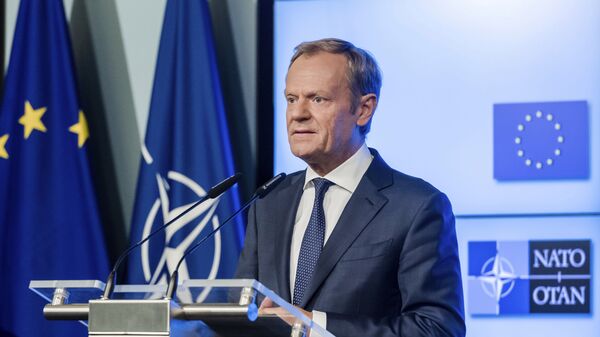 Russian President Vladimir Putin is doing everything he can to undermine the “the most beautiful political undertaking in Europe’s history,” said Donald Tusk, the president of the European Council (EC).

Tusk pointed to Saturday's elections in Latvia, in which the pro-Russian Latvian Social Democratic Party (SDPS) appears to have won a majority of seats in the nation's parliament, as a negative consequence of Kremlin influence, ratcheting up his comments in fear-mongering attacks at Moscow and its chief of state.

"Our problem is Russia," Tusk declared, "which is undermining whatever it can undermine in Europe."

At a conference on the future of the European Union hosted by the Pontifical University of John Paul II in Kraków in southern Poland, Tusk asserted that he "can provide numerous examples to prove that Russians will not refrain from any means to weaken European unity."

The president of the EC — the governing body for the powerful European Union (EU) economic bloc — suggested that the Riga vote results were "a turning point for that region, a moment which was planned in the Kremlin and not in Europe," adding that the results of the popular Latvian national vote made him "anxious," cited by Politico.

Final polling results in Riga have revealed that the pro-Russian Harmony party has garnered the highest number of votes.

Although the Polish-born EC president claimed during his speech that he had no "anti-Russia" bias, he continued to cite allegations of Moscow's meddling; in Brexit, in a cyberattack on the Organisation for the Prevention of Chemical Weapons and in recent independence referendums in Catalonia.

Tusk expanded his dire warnings by pointing out souring economic relations with the US, a longtime EU partner.

"Never before in my life has America been a problem for Europe," said Tusk, adding that, "what happened under the administration of my namesake Donald Trump is a new phenomenon."

"America is sailing away from Europe today," noted the former Polish prime minister, adding that, "it is intentional."

The EC president also spoke in support of recent immigration spikes in Europe, claiming that the EU could handle the influx of refugees from North Africa and the Middle East due, in part, to a treaty between Ankara and The Hague mandating the assistance of Turkey as a migration buffer zone.

"One can cope with the [European immigration] problem without a mouthful of nationalistic slogans and this nauseating rhetoric," he stated.