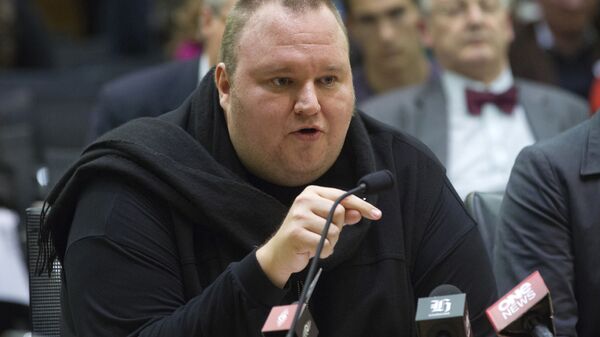 The flamboyant founder of file-sharing platform MegaUpload is sought by US prosecutors, who claim that his site helped millions of people download digital content illegally, stealing millions of dollars from copyright owners.

Internet tycoon Kim Dotcom, a New Zealand resident who has been fighting extradition to the US for over six years over criminal charges relating to a file hosting website MegaUpload, has pledged to "fight for internet freedom" and joked how he was considering a surprising move to win his legal battle with prosecutors.

Dotcom tweeted out a playful video captioned: "Preparing for my insanity defense."

Preparing for my insanity defense.
😂😭🤯🤪😂😬😘😹👅🐜 pic.twitter.com/sXD5NyGoNX

However, in a subsequent tweet he jokingly bemoaned that his lawyers advised him against his newly-minted "insanity" strategy, but vowed not to give up.

"I will continue the fight no matter what it takes," he claimed. "I will defend internet freedom, I will fight for your rights and I will stand up to the injustice brought upon us by the deep state and the people who are pulling the strings in the background."

Dotcom, 44, was born Kim Schmitz in Germany and is known for living a lavish lifestyle. He is wanted in the US over a now-defunct file sharing service MegaUpload. It all started back in 2012 after a police raid on his Auckland mansion at the request of the FBI. US authorities claim that his site was widely used to illegally download copyright-protected content, which generated $174 million in revenues and costed copyright owners over $500 million in losses.

The bureau has to get him on American soil first to try him, which has proved to be quite difficult. Dotcom's epic legal battle has been drawn out for more than six years, but he has a strong motivation: if the self-described "internet freedom fighter" is extradited, charged and found guilty, he could face up to 20 years in prison. Earlier this year, a New Zealand court ruled that he and three cohorts could be transferred to the US to face trial; the besieged internet mogul announced in response that he would seek review with the country's Supreme Court.