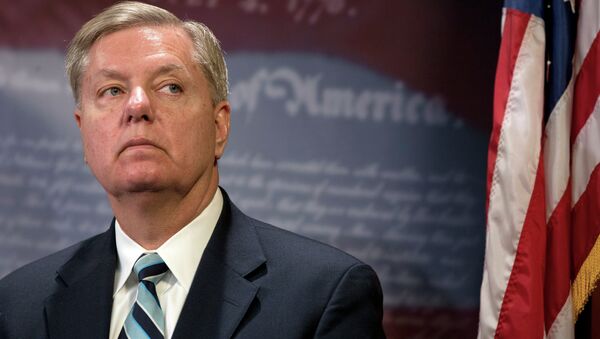 Speaking to the reporters immediately after the confirmation vote, Graham said that the nominee accuser was “treated well” by the Senate Judiciary Committee, NBC News reported.

Asked whether sexual assault survivors would be more reluctant to come forward after Kavanaugh’s confirmation, Graham said that “the roles were reversed: The slut whore drunk was Kavanaugh.”

Kavanaugh Confirmation Vote Sparks Protests Among Activists
Graham noted that he has had experience being the prosecutor in rape cases, defended people accused of sexual violence and sat as a judge in such cases, and he tried to review Kavanaugh’s process and look for “some standards, some presumptions, some evidentiary requirements.”

“All I can say is that seldom do you advance justice by creating an injustice, and I think it would have been unjust for Judge Kavanaugh to have his life ruined based on the allegations that were presented,” he said.

“Dr. Ford, I think, is the victim of a process,” Graham added, “we've got to have some verifications, some sense of balance, because if that's enough, just the mere accusation, then you're going to unleash Pandora's Box here. Because of those of us in public service, you should be scrutinized but you don't want to set a standard where you just take anybody out by accusing them.”

Dr. Christine Blasey Ford was one of three women to have recently accused Kavanaugh of sexual misconduct back in the 1980s, while they both were in high school. Last week she testified before the Senate, saying Kavanaugh pinned her down the bed and tried to remove her clothes while intoxicated. Kavanaugh denied all allegations, and the FBI investigation launched after Ford’s testimony didn’t find any supporting evidence. On Saturday Kavanaugh was confirmed for a lifelong position on the Supreme Court by the Senate, which voted 50-46.