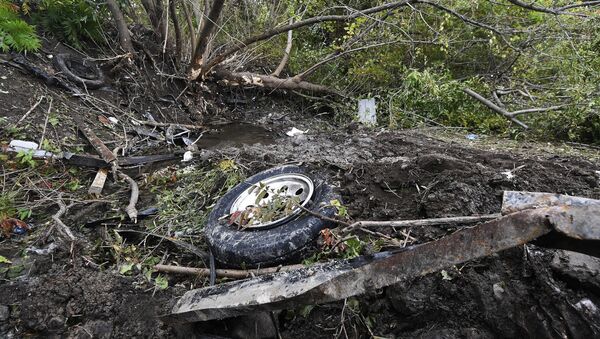 © AP Photo / Hans Pennink
Subscribe
All 18 people in a limousine, as well as two pedestrians, have died in a ‘horrific’ automobile accident in the New York town of Schoharie.

According to NY state police, a 2001 Ford Excursion stretch limousine failed to stop at a T-junction while moving at a speed of some 70 mph (112 kph) in the small town some 3 hours north of New York  City at around 2 p.m., the Associated Press reported.

The large stretch limo traveled hit an unoccupied SUV parked at a store, killing the driver and all 17 passengers, as well as two bystanders.

#HappeningNow On the scene of a terrible accident just off of route 30A in Schoharie. Looks like one car is crashed in ditch. Emergency crews are very active. pic.twitter.com/ydX6cdOKBE

The crash "sounded like an explosion," said Linda Riley, of nearby Schenectady, New York, parked nearby in her car with her sisters. Riley stated that when she got out of her car, she saw bodies on the ground and heard others around her screaming.

New York State Police Captain Richard O'Brien said Sunday that an investigation had been initiated and that there were ‘several’ police units involved, including a ‘face recognition unit’ and a drone team.

Local police added that the names of the victims would not be revealed until next of kin had been informed. The limousine was carrying a wedding party and the occupants were reportedly not wearing seatbelts.

National Transportation Safety Board (NTSB) chairman Robert Sumwalt later told a news conference that it was “one of the biggest losses of life we've seen,” calling it “ the most deadly transportation accident since February 2009,” when Colgan Air Flight 3407 crashed in Buffalo, New York, killing 50.

Illegal Alien Revealed to be Man Who Killed Couple in US Car Crash – Reports
A question of safety issues in limousines has been raised before, particularly in 2015 when four women were killed in a wreck on Long Island. The four were travelling in a Lincoln Town Car which had been cut apart and rebuilt in a ‘stretch’ configuration without regulated safety modifications.

A New York grand jury at the time stated that limousines often do not have safety features, especially if they are not built in regulated factories but simply converted by hobbyists out of ordinary vehicles. The grand jury called on New York Governor Andrew Cuomo to assemble a limousine safety group to oversee the manufacture and use of the commercial passenger vehicles.