Conor 'Looking Forward to Rematch' After Loss to Rival Khabib 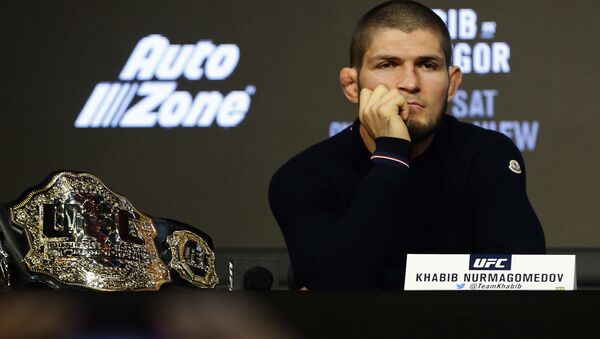 © REUTERS / Noah K. Murray-USA TODAY Sports
Subscribe
The Notorious was unusually tight-lipped after his clash with Khabib, who, in contrast, talked about congratulations from the Russian President and McGregor's own misconduct in the weeks ahead of the UFC event.

Conor McGregor spoke out hours after his long-awaited comeback to the UFC ended in a defeat by Khabib Nurmagomedov, dropping a hint that his saga with the Russian grappler may not be over yet.

"Good knock. Looking forward to the rematch," he wrote on Twitter.

Khabib was more talkative: at the post-match press conference on Sunday, he complained about McGregor's vitriolic behavior prior to the clash, apologized to Nevada and the UFC for sparking a brawl, and even claimed he had received a call from Russian President Putin who congratulated him on the victory.

The Irishman tapped out late into the fourth round after succumbing to a rear naked choke at UFC 229 on Saturday evening, local time in Las Vegas.

However, the defending champion Khabib quickly switched his attention from Conor to his camp outside the octagon: seconds after submitting Notorious, he leapt out of the ring to take on Dillon Danis, the Irishman's jiu-jitsu coach, plunging the arena into mayhem.

Both fighters were subsequently escorted out of the ring by police and security. UFC President Dana White refused to hand the lightweight belt to Khabib, who was named the winner by the ring announcer, Bruce Buffer, for fear of the crowd reacting in violent protest. White also confirmed that three members of Khabib Nurmagomedov's team were arrested after the brawl and also hasn't ruled out the Russian champ being stripped of his title over the incident.

The arena brawl marked the climax of a simmering conflict between the two camps, which first made headlines in April, when the Irish fighter hurled a metal dolly through the window of a bus transporting Nurmagomedov and his team, shattering glass and injuring lightweight fighter Michael Chiesa. Later on, he was arrested and pleaded guilty to disorderly conduct to avoid a jail sentence. The attack was preceded by a heated exchange between the Russian UFC fighter and McGregor's friend, Artem Lobov.

Khabib is the first Russian to have ever become a UFC champion. He claimed the lightweight title when he defeated Al Iaquinta on April 8. The 30-year-old Russian fighter remains unbeaten, extending his MMA win streak to 27. McGregor suffered his second defeat in the UFC.