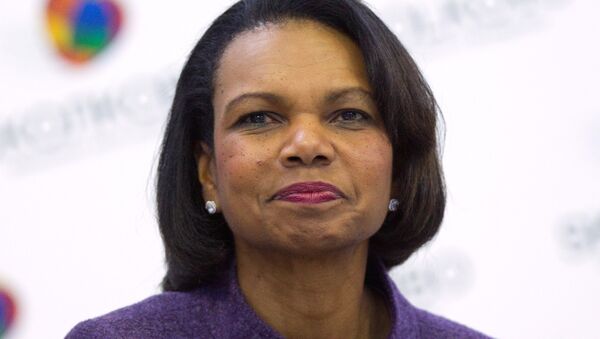 © Sputnik / Илья Питалев
/
Go to the mediabank
Subscribe
International
India
Africa
Ilya Tsukanov
All materialsWrite to the author
The former Bush-era secretary of state has accused Russia of "crossing all possible red lines" with the West.

In an interview for Novoe Vremya, a Ukrainian magazine, Condoleezza Rice said that in spite of Russia's behavior, "fortunately, we and our European allies were able to agree on collective sanctions against Russia in response to the annexation of the Crimea and Moscow's actions in the Donbass, and I think it's important to continue to do so."

In addition, Rice argued that "containing Moscow" will require Western countries, and especially the United States, to provide additional support to the Ukrainian military.

"In this regard, I support arming the Ukrainian military, I support the deployment of well-armed battalions in Poland and the Baltic states. Russia's leadership has already crossed all possible red lines, and deserve an adequate response," she said.

Well Duh! 14 Years Later, Condoleezza Rice Reveals Real Reason for Iraq Invasion
Rice also spoke out against the construction of the Nord Stream 2 pipeline between Gazprom and a group of Western European energy giants, saying that the US should find a way to convince the Europeans "to abandon Russian gas and the Nord Stream project."

Condoleezza Rice served as President George W. Bush's national security advisor in the run-up to the 2003 US invasion of Iraq, and as his secretary of state starting in 2005 and to the end of his second term, including in the aftermath of the 2005 Orange Revolution in Ukraine and the 2008 Georgian invasion of South Ossetia.

Crimea broke off from Ukraine and rejoined Russia in March of 2014 after a referendum in the aftermath of the Western-backed Maidan coup d'état in Kiev, some sixty years after Soviet leader Nikita Khrushchev transferred it to the Ukrainian Soviet republic from the Russian Soviet republic. In April 2014, Kiev sent troops to regions in eastern Ukraine which refused to recognize the new authorities, prompting the start of a civil conflict which the US and its European allies blamed on Russia. The Ukrainian crisis resulted in several rounds of sanctions Western sanctions against Moscow, with Russia responding by introducing countersanctions targeting Western foodstuffs. Moscow has rejected all claims of interference in the Ukrainian conflict, but has served as a guarantor of the Minsk ceasefire deal which has preserved a shaky peace in the region since early 2015.