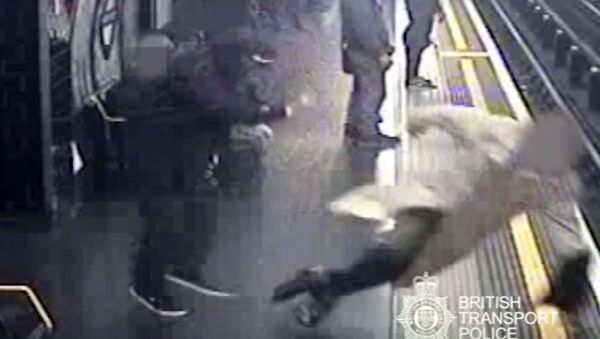 In the first incident, CCTV footage shows a man pushing a senior citizen onto the train tracks at Marble Arch station. He was hauled up to safety by a quick-thinking bystander, who suffered a head burn from the electrified track in the process.

The shocking moment CCTV captured a man attempting to murder two men on the London Underground.

Today, their attacker has been found guilty of two counts of attempted murder.

It later emerged that the victim was Sir Robert Malpas, the 91-year-old former boss of the Channel Tunnel operator Eurotunnel. He suffered a head injury and a fractured pelvis, BBC reported.

According to the national railway police force, the attack came on April 27, shortly after the man tried to shove another passenger onto the tracks at Tottenham Court Road.

CCTV footage shows the victim staggering forward slightly but managing to regain his balance just in front of the oncoming Central Line train.

The "Tube Pusher," identified as Paul Crossley, 46, pleaded not guilty to both offences in court on Friday but was convicted of two counts of attempted murder after a five-day trial.

According to the court papers, Crossley was diagnosed with paranoid schizophrenia at the age of 17. When asked by police whether there was any reason for what he did, he whined: "I had no sleep." He will be sentenced in November following a psychiatric report.

Siwan Hayward, Head of Transport Policing at Transport for London, called the attacks "shocking and dangerous" and welcomed Crossley's conviction. "The safety of our customers is paramount and we have worked with the police to bring the perpetrator to justice. Such incidents are thankfully extremely rare and we always support the strongest possible action against anyone who endangers our customers," he stated.