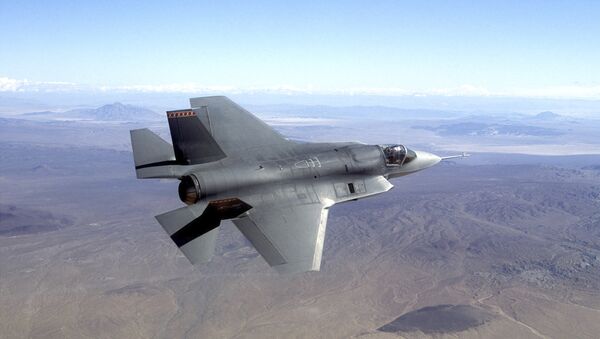 An additional shipment of US F-35 stealth planes will be supplied to Israel under President Trump's order, in retaliation to Syria’s recent acquisition of Russian S-300 missile defense batteries, according to the Israeli news website Debka.

Washington also notified Saudi Arabia and the United Arab Emirates (UAE) that the first US F-35 squadron would soon be deployed at Al Dhafra Air base 32 kilometers south of UAE's capital Abu Dhabi.

Debka cited military sources as saying that the F-35 deliveries indicate the US's and Israel's "determination to maintain Israeli Air Force's operations over Syria, notwithstanding the presence of the S-300s and boosted Russian-Syrian air defense capabilities."

The remarks came a few days after Israeli Regional Cooperation Minister Tzachi Hanegbi claimed that the F-35 stealth fighters will be able to avoid S-300 missile systems strikes and can possibly destroy them right on the ground.

"You know that we have stealth fighters, the best planes in the world. These batteries are not even able to detect them. The operational abilities of the air force are such that those [S-300] batteries really do not constrain the air force's abilities to act," Hanegbi alleged.

Israeli Defense Minister Avigdor Lieberman expressed the government’s discontent over Russia's delivery of S-300 missile system to Syria, but said that the move will not stop Israel from continuing its military operations in the war-ravaged Arab country.

On Tuesday, Russia deployed 49 components pertaining to the S-300 system, including radars, control vehicles and four launchers, to Syria, in response to the destruction of a Russian Il-20 reconnaissance plane with 15 airmen onboard on September 17.

Israel Reiterates Its Stance on Russian IL-20 Downing in Syria
The Russian Ministry of Defense blamed the downing of the aircraft on Israel, accusing its warplanes of using the Russian aircraft as a shield against Syrian rockets. The Ministry also pledged to beef up Syrian air defenses and take a number of other measures to boost the safety of Russian military personnel in Syria.

In late May, Amikam Norkin, the commander of the Israeli Air Force, declared that the Jewish state became the first country in the world "to use the F-35 in operational activity." According to the BBC, Israel was also the first state to import the single-seat F-35 fighter jets from the US.

000000
Popular comments
. Russia should immediately and publicly handover at least one S400 system. Syria deserves it.