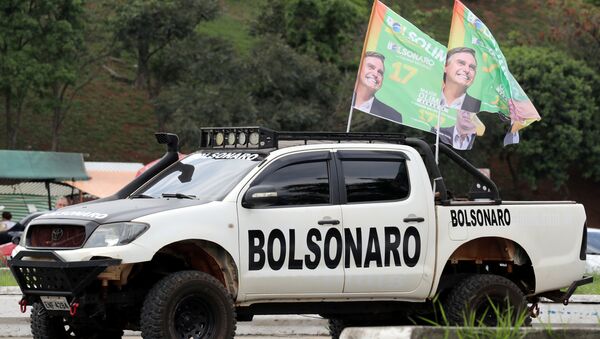 © REUTERS / Paulo Whitaker
Subscribe
International
India
Africa
RIO DE JANEIRO (Sputnik) – Brazilian presidential candidate Jair Bolsonaro has extended his lead over rivals as potential support for him in the Sunday election has increased from 32 percent to 35 percent since the beginning of this week, the fresh data of the Datafolha pollster showed.

According to the poll results, released on Friday, candidate Fernando Haddad will be supported by 22 percent of the voters.

Presidential candidate Ciro Gomes is expected to come in the third with 11 percent of the respondents saying they will vote for him in the election.

'The Elections Are Very Polarized in Brazil Between Left and Right' – Expert
READ MORE: Brazil's Jailed Ex-President Lula Gives Up on Running for Presidency — Reports

The support for politician Geraldo Alckmin has fallen by 1 percent to 8 percent since the beginning of the week.

The poll was held on Wednesday and Thursday among 10,900 people in 389 Brazilian municipalities.

The first round of the Brazilian presidential vote is scheduled to take place alongside the parliamentary election on Sunday. The second round is set to be held on October 28 if the 50-percent threshold would not be met by any of the candidates.