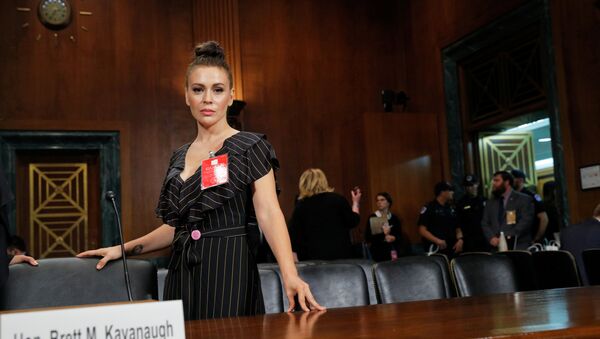 © REUTERS / Jim Bourg
Subscribe
The 80s TV sitcom star has been making controversial headlines for her behavior during the Kavanaugh hearings and statements on women’s rights; she returned to the spotlight after she lashed out at the Senate Judiciary Committee Chairman for his comment on the moderate number of its female members.

When asked about why there are not more female members on his committee, Senate Judiciary Committee Chairman Chuck Grassley, representing the Republican Party, told the reporters “It’s a lot of work — maybe they don’t want to do it.”

“Well, we can't do anything about that. First of all, the people of the states elect women or men. So you've gotta go by that. And then you've gotta have a desire to serve. And my chief of staff of maybe three years tells me that we've tried to recruit women and we couldn't get the job done,” he said, as quoted by  CNN, when journalists asked him if he wanted a woman added to the committee.

This elicited a furious response from actress and #MeToo activist Alyssa Milano, who criticized the Supreme Court nomination of Brett Kavanaugh and attended the Senate Judiciary Committee hearing, where Dr. Christine Blasey Ford testified about her allegation that Kavanaugh attempted to rape her during a 1982 high school party. She eventually got a lot of media attention for her outfit, which many branded as revealing, as well as having her phone confiscated taking pictures and tweeting during the proceedings.

This time she made a splash tweeting a Wall Street Journal article and citing its headline “Grassley Says Workload Discourages Women Senators From Joining Judiciary Panel” with a demeaning description of the 85-year-old Senator.

“It’s a lot of work — maybe they don’t want to do it…My chief of staff of 33 years tells me we’ve tried to recruit women and we couldn’t get the job done.” https://t.co/z6LTK0MF9w

​However, she happened to drop another part of the headline, reading “Then Walks Back Remark.” This detail referred to Grassley’s later clarification of the initial comment about difficulties with recruiting female Senators, implying gender played no role.

"We have a hard time getting men on the committee. Do you know we've got four people that are on the committee because the leader asked them to be there because they couldn't fill the seats up? They said we need you. It's just a lot of work whether you're a man or a woman. It doesn't matter," he said, as cited by the CNN.

Grassley also added “On average, any woman in the United States Senate, whether they’re on Judiciary or any other committee, probably works harder than the average man.”

The Senator also predicted that the GOP would eventually have female representation on the Committee; now it only has four women, all of whom are Democrats, which was scrutinized during the Kavanaugh hearings.

After the outlet Daily Caller brought Milano’s inconsistency into the spotlight, this prompted criticism towards Milano among some users, who slammed the actress for inaccuracy.

These illiterate folks can’t say anything without using their Liberal LabelMaker!! Nothing coherent to anything they try to say — without a throwing a label on it. pic.twitter.com/QgSXFskz6H

Why let the facts get in the way?