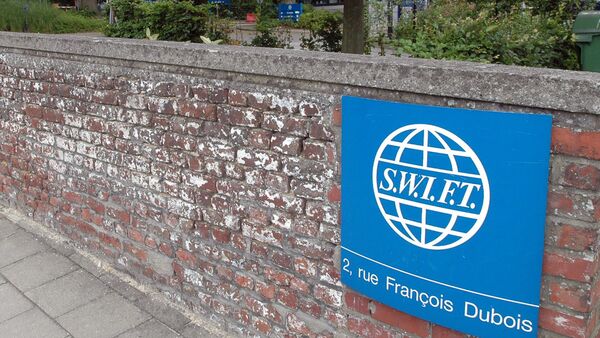 © AFP 2021
Subscribe
The internationally acknowledged banking center has joined the voices from across Europe about creating an independent analog for the Society for Worldwide Interbank Financial Telecommunication (SWIFT) amid US anti-Iran sanctions. Russia, which has already created its own system, voiced readiness to cooperate within a “euro-SWIFT” system.

Swiss Ambassador to Moscow Yves Rossier has affirmed that his country can join other states in setting up an independent alternative the Society for Worldwide Interbank Financial Telecommunication (SWIFT).

“If there are any new developments in the financial sector, we will closely monitor them, but this is clearly a matter for reflection in the EU, not in Switzerland… But if a new payment system appears, every country will take part in it, including us, of course, why not,” the diplomat told Sputnik.

In August, German Foreign Minister Heiko Maas confirmed that the EU was working on an alternative to SWIFT as part of its efforts to save the Iran nuclear deal. After the US withdrawal from the landmark nuclear agreement in May, Washington threatened to hit European companies doing business with Tehran with secondary sanctions, similar to earlier threats against energy concerns partnering with Russia on the Nord Stream 2 gas pipeline project.

Later a spokesperson for the German finance ministry also confirmed the European plan to legislate a special purpose financial vehicle, according to German news outlet Spiegel. The EU special purpose financial vehicle will keep the cash inside the economic bloc and away from US-controlled global money-transfer networks, including SWIFT, while also avoiding the use of any bank afraid of being locked out of doing business with US financial markets.

"The German government is working together with the EEAS and European Commission, as well as France and the United Kingdom, on maintaining financial payment channels with Iran," the spokesperson noted, adding, "The negotiations on this are intensive and ongoing. There are different models under consideration," cited by Politico.

Russian Finance Minister Anton Siluanov, commenting on the recent statements, has expressed Moscow’s readiness to cooperate within some kind of euro-SWIFT system to process operations among European banks and financial institutions, including oil and other resources payments.

«We are ready to join such offers. That’s why it seems to me that this would be a way-out and response to these restrictions the US is imposing on companies and financial institutions, using dollars for settlements,” he told the Russian broadcaster Rossiya 24.

The Brussels-based international interbank payment system SWIFT, created in the 70s, is now used by nearly 11,000 organizations in more than 200 countries. Criticized for sharing some information with the US government following the 9/11 attacks, the system in 2014 stated that it’s been put under pressure by some countries, insisting on its joining the sanctions against Russia.

In the wake of Western sanctions over the Ukrainian crisis and threats to cut Russia off from the SWIFT in 2014, the Russian Central Bank created its own network, known as the System for the Transfer of Financial Messages, to be activated in the event that Russia's access to SWIFT is cut off. Earlier this year, a source told Russian media that Russia’s SWIFT alternative would also be upgraded to use blockchain technology by 2019.

000000
Popular comments
The Swiss always know wich way the wind is blowing, the rest of Europa should start paying attention.