IRGC: Netanyahu Will Be Forced to 'Flee Into Sea,' Should 'Practice Swimming' 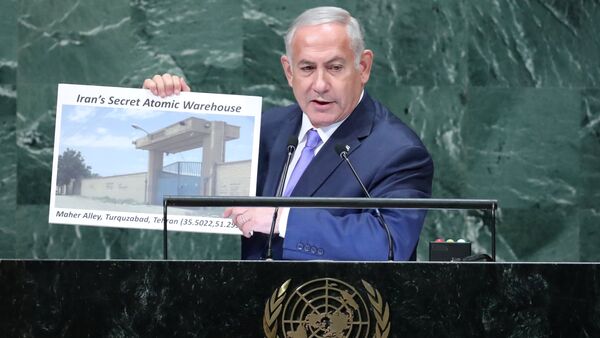 Israeli Prime Minister Benjamin Netanyahu vowed this week to continue "doing what it takes to defend itself" against Tehran, including fighting Iran's alleged presence in Syria and Lebanon.

"I tell the prime minister of the Zionist regime to practice swimming in the Mediterranean because soon you will have no choice but [to] flee into the sea," Salami said, speaking at a rally in Isfahan, central Iran on Friday, according to Fars News.

Netanyahu Vows to Counter Alleged Iranian Forward Bases in Syria
"They are not at the level of being a threat for us; Hezbollah is enough for destroying them," the commander added, addressing IRGC volunteers.

Accusing Tel Aviv of deceiving the world about Iran, the senior officer accused Israel of acting as a "political mannequin" in the US shop window.

Turning his ire toward Washington, Salami charged the US with spending $7 trillion on wars in the Middle East, adding that the US has been defeated with each effort. "We do not have military bases anywhere, and our presence in Syria is limited, which represents our values," he added, referring to the source and scope of Iran's regional influence.

Salami also praised what he called the "thunderous" October 1 missile strikes against Daesh* in Syria, which Iran launched in retaliation following the September 22 terrorist attack on a military parade in Ahvaz, Iran which left 25 people dead and dozens more injured.

Traditionally rocky relations between Iran and Israel hit new lows last week at the UN General Assembly meeting, with the two countries exchanging barbs over Syria and Iran's alleged secret nuclear weapons program. Last Thursday, Israeli Prime Minister Benjamin Netanyahu claimed that Tel Aviv had discovered a second secret nuclear facility in Tehran, and vowed that Israel would "never" accept the efforts of "a regime that calls for our destruction to develop nuclear weapons." Iranian Foreign Minister Javad Zarif shot back, saying that Israel was the "only regime in our region with a secret and undeclared weapons program – including an *actual atomic arsenal*."

Baghdadi Barely Escapes Death by Showing Up Late to Daesh Meeting - Reports
Iran severed all diplomatic and commercial relations with Israel after the 1979 Iranian Revolution, and has repeatedly declared that the "Zionist regime" would disappear in the event of a war with Iran. In 2015, Supreme Leader Ayatollah Ali Khamenei declared that "in 25 years' time, with the grace of God, no such thing as the Zionist regime will exist in the region."