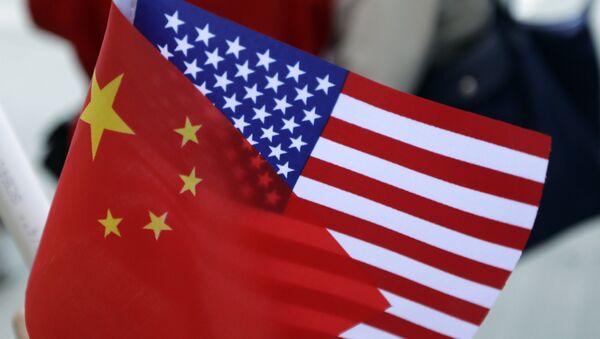 Speaking at the Hudson Institute in Washington DC on Thursday, Pence strongly condemned China’s increasingly oppressive domestic policies and aggressive behaviors globally, while accusing Beijing of trying to interfere in upcoming US elections as part of "a whole-of-government approach to advance its influence and benefit its interests."

Pence also stressed that the Trump administration is determined to take actions to protect US interests.

"Our message to China’s rulers is this: this President will not back down. The American people will not be swayed. And we will continue to stand strong for our security and our economy, even as we hope for improved relations with Beijing. Our administration is going to continue to act decisively to protect America’s interests, American jobs, and American security," he said.

US Considers 'Trade Coalition' With EU, Japan to Confront China
After US President Donald Trump took office early last year, he started to introduce new policies that are more and more hostile toward China. The Trump administration’s belligerent trade policies against China triggered a tit-for-tat "trade war" between Washington and Beijing, as both countries slapped steep reciprocal tariffs on each other in recent months.

"You need to first understand the definition of a ‘Cold War.’ The bilateral relation between the United States and China is very different from that between the United States and the Soviet Union. There’s a misconception [among Chinese scholars] that different political factions in the United States have reached a consensus to be ‘tough’ against China. But what their definition of ‘being tough’ is also very different. For example, on the issues related to South China Sea, is there a consensus to engage in a military conflict with China? When it comes to whether to take military actions against China, all sides would immediately have different answers," Chen Dingding, an international relations professor at Jinan University in Guangzhou, told Sputnik.

The expert added that on other issues, such as how to deal with Taiwan or whether to introduce steep tariffs on China, it’s unlikely for different political factions in the United States to reach an agreement.

Other Chinese scholars pointed out that the apparent consensus in the United States to be tough against China came as a result of those who used to advocate engagement with Beijing are hesitant to speak up today.

"Previously, when there were disagreements or disputes between the United States and China, you could always hear voices from those who are willing to defend China, along with the harsh criticism on Beijing. But in the past two years, such voices disappeared. This leaves an impression that people in the United States have reached a consensus when it comes to criticizing China," Ding Xueliang, director of the Institute for China's Overseas Interests, Shenzhen University, told Sputnik.

Professor Ding explained that the hesitance among the group who used to defend China to speak up may have resulted from their disappointment in the direction Beijing is moving toward.

"For those who do not want to speak up today, they have mixed feelings. They used to have a lot of expectations about China. Previously, they could also come up with convincing evidence or excuses for their support on China-friendly policies. But in their eyes, those expectations failed to materialize after a few years," he said.

During his speech, US Vice President Pence expressed similar disappointment over previous efforts from the United States failing to bring freedom to China.

"After the fall of the Soviet Union, we assumed that a free China was inevitable… Previous administrations made this choice in the hope that freedom in China would expand in all of its forms – not just economically, but politically, with a newfound respect for classical liberal principles, private property, personal liberty, religious freedom — the entire family of human rights. But that hope has gone unfulfilled," he said.

Unlike UK politician Winston Churchill’s iconic "iron curtain" speech, which is widely viewed as marking the start of the Cold War, Pence needs to back up his statements with specific policy packages and actions, before a new US-China "Cold War" can be discussed, Professor Ding added.

When Pence accused China of attempting to interfere with US politics, he argued that China is retaliating because Trump’s policies are working.

"China has initiated an unprecedented effort to influence American public opinion, the 2018 elections, and the environment leading into the 2020 presidential elections. To put it bluntly, President Trump’s leadership is working; and China wants a different American President," Pence said.

However, Chinese scholars argued that a new US president wouldn’t make much difference for China.

"If there is a new US president, some policies on China may differ. But the overall trend will remain the same. It’s possible the new president would be more aggressive on China than Trump. Even if the new president is softer on China than Trump, the fundamental US policies would be the same, with some slight difference in wording. If you look at what happened under former US presidents including Bill Clinton, George W. Bush or Barack Obama, they were all very friendly toward China after taking office, before coming back to hostile policies against Beijing at the end of their terms," Professor Ding from Shenzhen University said.

Pence Accuses China of Seeking to Change US President, Tech Theft
The expert explained that the US-China rivalry is fundamentally different from the competition the United States faced from Japan or Germany before.

"If you look at previous trade disputes the United States had with Japan or Germany, there were some harsh statements, but the dispute would not escalate into a full-scale confrontation. The Chinese political system is a very important distinction. For example, Japan presented huge threats to US manufacturing industries, such as TV production and automotive, leading to massive layoffs and started to buy many iconic landmarks in the United States. But the trade dispute with Japan would not be viewed as a threat to the US political system," he said.

The expert noted that China’s increasingly aggressive foreign policy under Chinese President Xi Jinping could also have triggered fears from those who seek global hegemony in the United States.