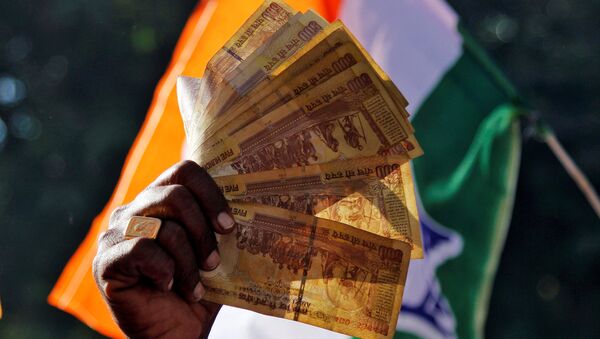 India's Central Bank and Ministry of Finance have been tasked with exploring the feasibility of rupee and barter-based trade agreements with crude oil producing nations such as Russia, Iran and Venezuela, the Times of India has reported, citing an official familiar with the situation.

Citing one example, the official pointed to a potential scheme of trading Indian pharmaceuticals for Venezuelan oil.

In its meeting on Thursday, the Indian inter-ministerial panel headed by Commerce and Industry Minister Suresh Prabhu also asked the Central Bank to explore the possibility of rupee-yuan trade with China, trade deals using the euro instead of the dollar, and the promotion of gold-related initiatives, such as gold-denominated savings accounts and sovereign bonds, and measures to cut gold imports.

The meeting came amid a sharp slide in the value of the rupee against the dollar this week, with the Indian currency settling at a record low of 73.81 rupees against the dollar on Thursday. The weakening currency combined with rising crude oil prices have served to widen New Delhi's trade and current account deficits.

India is the world's third largest importer of crude oil, with over 60 percent of its imports coming from the Middle East. The country's oil imports rose by 53.55 percent to $58.81 billion in the first five months of 2018.

Speaking at a Russia-India summit in New Delhi on Friday, Russian President Vladimir Putin said that Moscow was ready to work with India on a series of energy projects, including Far East LNG and Arctic LNG 2, as well as projects to develop oil and gas fields in Siberia, Yamal and the Russian continental shelf.

World
Russia Ready to Consider Joint Work With India in Energy Projects – Putin
Friday's summit may lead to new energy deals and a substantial growth in the share of Indian firms in Russia's oil and gas sector, officials have said.

Speaking at the Russian Energy Week forum in Moscow earlier this week, Putin commented on Russia's efforts to reduce dependence on the dollar in trade, characterizing US sanctions policy as a "colossal strategic mistake" which has served to "undermin[e] confidence in the dollar as a universal…reserve currency today." Last month, the chairman of Russia's second-largest bank proposed a multi-step 'de-dollarization' plan for the Russian economy, which is expected to appear on Prime Minister Dmitry Medvedev's desk for analysis sometime in the next two weeks. Russia is one of many countries looking to reduce their dependence on the greenback amid increasingly harsh US tariff and sanctions policy.