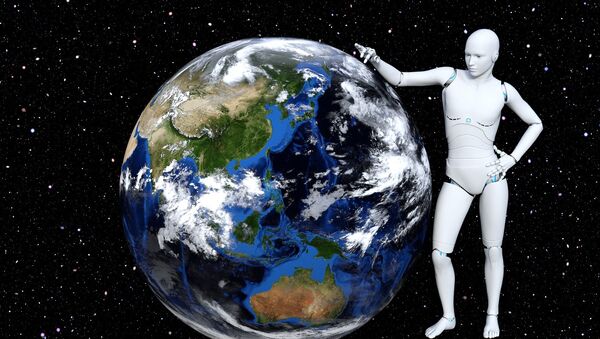 Evgenia Filimianova
All materialsWrite to the author
In science fiction, AI machines are often portrayed aiding and even saving humans in space. Reality of space exploration is extensively reflective of increasing use of smart machines in research, measurements and mapping of exoplanets.

It may not be this month or even this year that humankind sees Artificial Intelligence (AI) machines replace human researchers in the space environment. AI technologies, however, are actively implemented in space exploration today, reducing risks and improving costs of operations.

Head of Surrey Technology for Autonomous systems and Robotics (STAR) Lab, Director of UK National Research Hub on Future AI & Robotics for Space (FAIR-SPACE) and Professor of Space Autonomous Systems at the University of Surrey, Professor Yang Gao described the key advantages of using AI in the exploration of the remote, hostile environment of space.

"It helps prevent human from working in hostile hazardous environment, potentially to improve safety or reduce cost of the operation. AI with decision-making capabilities can also help improve productivity such as being able to respond to opportunistic science in space exploration," Professor Gao told Sputnik.

Having nearly 20 years of research experience in developing robotics and autonomous systems, Professor Gao was involved in the Phase A study of the ExoMars Rover, a joint mission of the European Space Agency (ESA) and the Russian space agency Roscosmos, aimed to find signs of biological or geological activity on Mars. 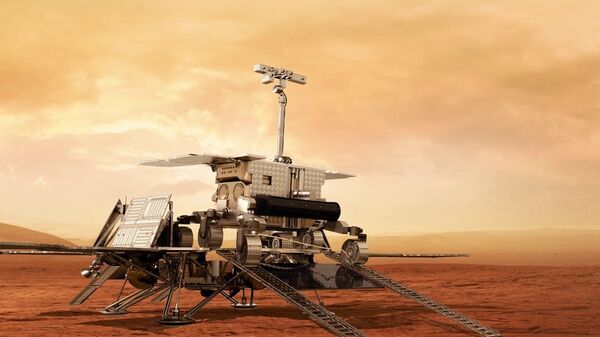 "ExoMars rover (or ExoMars 2020) mission involves various AI technologies ranging from autonomous navigation onboard the rover to intelligent operation from the ground control station. I was involved in the Phase A study of the ExoMars rover where the team analyzed the rover chassis design and performance," Professor Gao told Sputnik.

The ExoMars rover will travel across the Martian surface to search for signs of life, collecting samples with a drill and analyzing them with next-generation instruments.

In planet data analytics, just as in outer space data transmission and space navigation, astronauts need to be able to rely on machines, given the hostility of the environment.

In deep space exploration, AI has the potential to minimize the need to communicate with Earth-based researchers and centers. Even at the speed of light, about 186,000 miles per second, radio messages take at least 11 minutes to reach Mars (depending on its varying distance from Earth), according to NASA. Time delays, when far away in space, are inconvenient when astronauts have to depend on help from colleagues on Earth. Correct on-the-spot decisions may prove life-saving, with reliance on smart machines growing exponentially.

"Reliability and safety are essential in the design and development of AI robotic systems for space applications. Those machines we develop for and fly into space need to be validated and verified to ensure they meet both functional and performance requirements," Professor Gao explained.

Because of time delays, human and robotic crews exploring deep space must depend less on help radioed from colleagues on Earth. Far away in space, astronauts will not only have to craft complex plans in 10 minutes or less, but they may need to make difficult, split-second decisions on their own.

High accuracy in measurements and data collections is essential to successful space research projects. The world's first precision formation flying mission, ESA's Proba 3, to be launched in late 2020, will see a pair of satellites flying together and maintaining a fixed configuration as a 'large rigid structure' in space to prove formation flying technologies. The aim of the project is to study the Sun's faint corona closer to the solar rim than has ever before been achieved. Scientists also plan to employ Proba 3 to measure the achievement of the precise positioning of the two spacecraft. 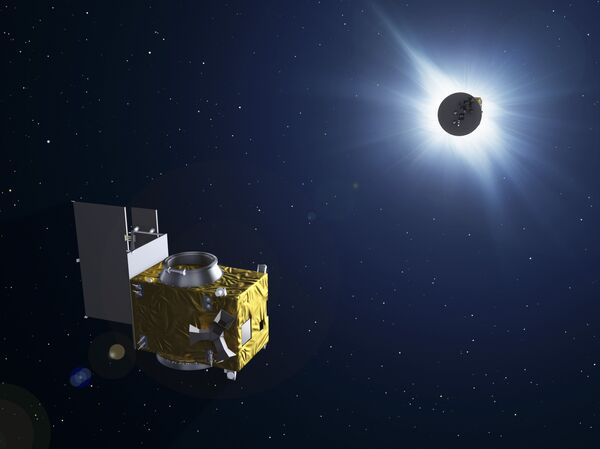 The two satellites of Proba-3 will fly in formation to form an external coronagraph in space, one satellite eclipsing the Sun to allow the second to study the otherwise invisible solar corona.
© Photo : ESA - P. Carril, 2013

Speaking about the Proba 3 mission and application of automated instruments in the process, Professor Gao told Sputnik:

"In the Proba3 mission, the work my team has contributed involves developing automated calibration process and algorithms for space metrology instrument called the Lateral and Longitudinal Sensor (FLLS.) The instrument will be taken on-board by one of two spacecraft to allow high precision and accuracy measurements between the two spacecraft within Proba3."

The academic explained that when it comes to costs and expenses, robotic missions are comparably less expensive than human space, due to launch, development and operational costs.

On Earth, looks do matter. Can the same be argued for AI machines employed in space?

Among robots built to assist humans in space exploration, Robonaut 2, designed by NASA and General Motors, looks very much humanoid. In creating Robonaut, NASA's goal was to expand human "ability for construction and discovery" by utilizing a robot. Not only did the scientists upgraded the machine with all the necessary technology, but they also gave him human-like looks. 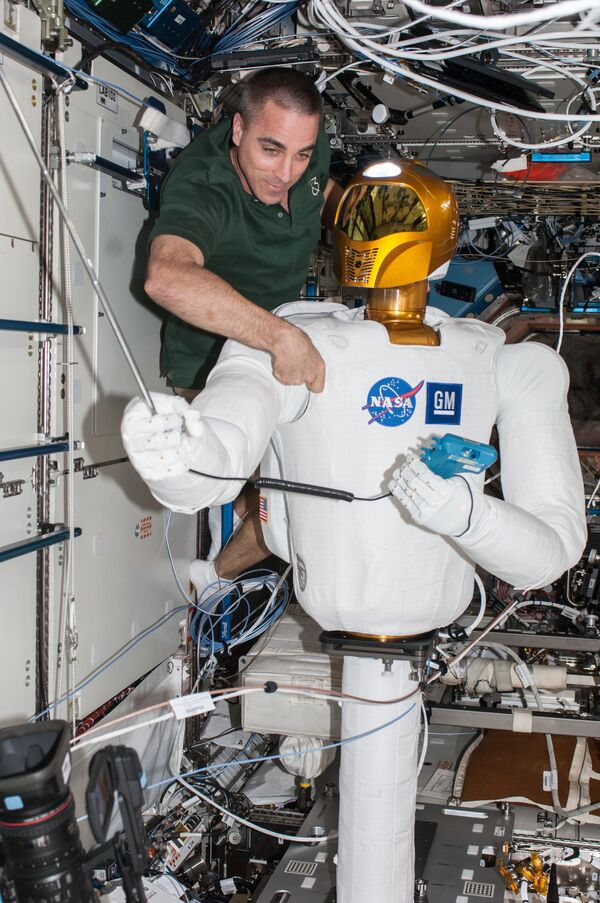 NASA astronaut Chris Cassidy, Expedition 36 flight engineer, works with Robonaut 2, the first humanoid robot in space, during a round of ground-commanded tests in the Destiny laboratory of the International Space Station.
© NASA

A differently shaped machine, still displaying a human face, however, has been launched into space in June 2018. A robot endowed with AI and known as CIMON, short for "Crew Interactive Mobile Companion" is meant to work with ESA's astronaut Alexander Gerst on three separate investigations. 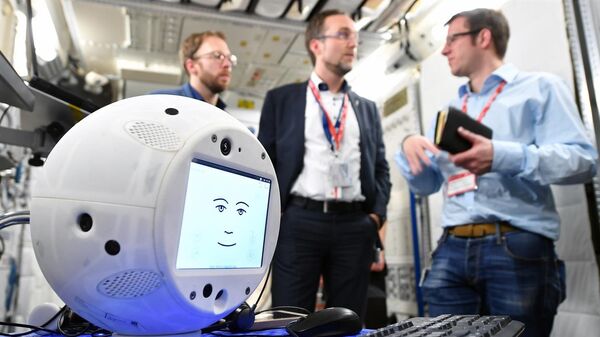 A close-up of CIMON, the Crew Interactive Mobile Companion, an A.I.-equipped robot that is the first of its kind to fly in space.
© Photo : DLR/T. Bourry/ESA

"They will experiment with crystals, work together to solve the Rubik's cube and perform a complex medical experiment using CIMON as an 'intelligent' flying camera," an official statement explained.

CIMON is roughly spherical, weighs 11 lbs. (5 kilograms) and displays a human face on its screen.

CASE and TARS, the main robots featured in the film Interstellar, look nothing like a human — that puts function above humanness in the design of technology.

So does it matter which shape and form the hardware that carries AI takes?

"The physical appearance of robots is typically driven by the required mobility (or locomotion capability) of the machine. It does not always need to be humanoid," she told Sputnik.

Having AI is really critical for having humans further and further away from the planet. As humanity takes on the challenge of mapping exoplanets and exploring distant planets in the solar system, AI and machine learning algorithms contain a largely untapped potential to greatly advance research.