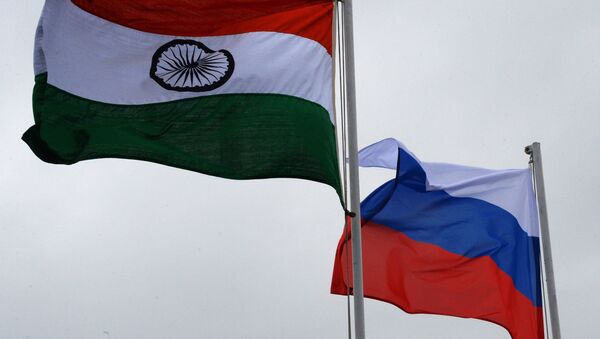 © Sputnik / Vitaliy Ankov
/
Go to the mediabank
Subscribe
International
India
Africa
Russia’s efforts to stabilize West Asia and its initiative to improve ties with Japan and expand partnership with South Korea is signaling that Russia will emerge as a factor of stability in the Indo-Pacific region, where China has threatened the USA’s long-standing dominance, observe two eminent Indian foreign policy analysts.

New Delhi (Sputnik) — Old ally India will be a key partner in Russia's Indo-Pacific strategy, as Delhi and Moscow will look forward to synergize their positions at the annual summit scheduled in the Indian capital on October 5. Beginning earlier this year, India and Russia have been holding regular consultations on the stability of the Indo-Pacific region, as India is fast emerging as the pivot in the Indo-Pacific, sources told Sputnik. The situation in the Indo-Pacific was a key item on the agenda of discussion when President Vladimir Putin and Prime Minister Narendra Modi held their informal summit in Sochi this May.

Asia
Lavrov and ASEAN Foreign Ministers Meet at Asia’s 'Crossroads of Cultures'
The two sides agreed on a non-bloc security architecture in the Indo-Pacific region and it was not for no reason that PM Modi referred to his meeting with President Putin in the Shangri-La Dialogue keynote address. In PM Modi's address at Shangri-La Dialogue, which focused on Indo-Pacific strategy, President Putin was named before any other leader.

"The Modi government has made it amply clear starting from his June speech at Shangri-La Dialogue that India does not see Indo-Pacific formulation as exclusive to a fixed number of nations. Following that, the government of India has publicly announced its decision to place the Indo-Pacific on agenda in its negotiations with both China and Russia, as both these powers have substantial interests in this maritime region," Dr. Swaran Singh, a professor at the School of International Studies at Jawaharlal Nehru University in New Delhi and senior fellow at the Charhar Institute in Beijing, told Sputnik.

Signaling a wider commitment to the Indo-Pacific region, it will be President Putin who will be attending this year's East Asia Summit and not the Russian PM, as has been tradition. He will also undertake a state visit to Singapore amid the city-state's interest in harnessing the economic potential in Eurasia. The Russian president has made efforts in a systemic fashion to create Eurasian Economic Union and Eastern Economic Forum and create synergy between Eurasia and Indo-Pacific region. SCO is a key pillar in this endeavor.

"This is bound to be on agenda, among others, of the parleys between President Putin and Prime Minister Modi. Both leaders have shown strong chemistry in their past meetings and there is also strong desire on both sides to strengthen their enduring friendship of Russia and India where geopolitical formulations like Indo-Pacific hold significance," Dr. Swaran Singh added.

World
US Warship Comes Near Beijing-Reclaimed South China Sea Islands - Report
President Putin's participation in the East Asia Summit has been long overdue and this will signal that Russia is taking multilateral diplomacy in Asia seriously and that it feels about the EAS as the main ASEAN-centred security mechanism. The Indo-Pacific is home to growing powers which would build the new "polycentric world," according to Moscow. This is manifested through Russia's relations with both individual countries — China, India and Indonesia and organizations like the SCO and ASEAN. The principle of multi-polarity and inclusiveness, as advocated by India for the Indo-Pacific region, finds resonance with Moscow.

Another foreign policy observer said that India defines the Indo-pacific region in a different way than the United States and this itself shows that India wants multilateral cooperation and not the monopoly of one power in the region.

"The definition of the Indo-Pacific region as given Prime Minister Narendra Modi is from the shores of Africa to America. This is different from the perception which America shares. For India, the area between Mumbai's shores and the Gulf is critical; this is an area where India and Russia can play a cooperative role.  We must be aware that the Gulf region has 8 million Indians living there and accounts for remittance 45 billion dollars to India," Asoke Mukerji, former Indian ambassador and permanent representative to the United Nations, told Sputnik.

Asia
Putin Seeks to Resume Talks on Joint Projects Between Moscow, Seoul, Pyongyang
India and Russia have successfully collaborated to combat piracy and make ship movements safer. The friendly countries of both Russia and India in the Gulf region are again an asset for this relationship, Mukerji Added

READ MORE: Defense Deals Worth $10Bln on the Cards During India-Russia Annual Summit

Through President Putin's visit to Singapore, Russia will remind other powers of its status as a major player in the region and share a vision of the regional security system. President Putin will talk about the Greater Eurasian Partnership — Russia's idea of a vast space with unified rules of the game in trade and investment, stretching all the way from the European Union to ASEAN. Russia has the significant potential to play the role of a third force, whose appeal will grow as competition between the USA and China intensifies. In such circumstances, Indo-Russian partnership for the Indo-Pacific will add greater stability to the region.

The views and opinions expressed by the Speakers in this article are those of the speakers and do not necessarily reflect Sputnik's position.