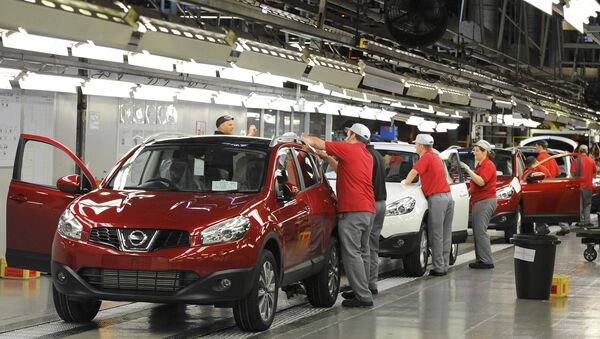 © REUTERS / Nigel Roddis
Subscribe
Japanese automaker Nissan has voiced strong concerns over a "no-deal" Brexit and has warned that any disruptions to its northeastern factory in the UK would have grave consequences.

Nissan chairman Carlos Ghosn said that its British operations were "a European investment based in the UK", which are responsible for almost 8,000 jobs mainly based at its Sunderland factory. Roughly 30,000 UK-based employees work for British suppliers of Nissan.

A spokesperson from Nissan UK told Sputnik via a company statement that Brexit had serious implications for its exporting capabilities within the single market.

"Since 1986, the UK has been a production base for Nissan in Europe," the statement read. "Our British-based R&D and design teams support the development of products made in Sunderland, specifically for the European market."

He said that frictionless trade helped the Sunderland plant grow into Britain's largest factory in its automotive history, which exports over half of its production to the European Union.

"Today we are among those companies with major investments in the UK who are still waiting for clarity on what the future trading relationship between the UK and the EU will look like," he continued.

The statement also stated that a sudden change from common market to WTO rules "will have serious implications for British industry," and urged UK and EU negotiators to work together "towards an orderly balanced Brexit that will continue to encourage mutually beneficial trade."

A spokesperson from Jaguar Land Rover, the UK's largest automaker, told Sputnik that the company wanted the right deal post-Brexit. "The wrong Brexit deal or no deal would cost the company more than £1.2bn profit each year," the spokesperson said.

"To remain competitive as a business and continue to invest heavily in UK, we urgently need the government to provide certainty for business, including guaranteed tariff-free access and frictionless trade with the European Union," JLR's spokesperson continued.

A Groupe PSA spokesperson told Sputnik that it was important that "negotiations on the UK's future relationship with the EU are concluded in a timely manner."

"It is also important that business continues to benefit from the free movement of goods and people during this period," the spokesperson continued.

"Communication on the development of the future relationship with the EU should also be clear and transparent," Groupe PSA said, adding that "tariff-free trade without non-tariff barriers are essential for the continued smooth operation of our business.”

"A bad Brexit deal would cost Jaguar Land Rover more than £1.2bn profit each year," adding that Jaguar would have to "drastically" adjust its spending profile.

Dr. Speth added that the company had spent £50 billion over 5 years and planned to invest £80 billion in five years more, but "would be in jeopardy should we be faced with the wrong outcome."

"If the UK automotive industry is to remain globally competitive and protect 300,000 jobs in Jaguar Land Rover and our supply chain, we must retain tariff and customs-free access to trade and talent with no change to current EU regulations," Speth continued.

Dr. Speth also voiced his frustrations in September at the Zero Emissions Vehicle Summit in Birmingham, stating that as JLR's supply chains "reached deep into Europe" and adding that one in three cars exported from the UK came from Jaguar Land Rover, with the EU receiving 20 percent of total exports.

Here’s the video from the chief executive of Britain’s biggest car manufacturer saying he doesn’t now know if any of JLR’s manufacturing will be able to function the day after Brexit in 6 month’s time — from same lectern used by PM moments later: pic.twitter.com/UVVlJDoKEY

Other manufacturers remain largely divided on Brexit, with PSA chairman Carlos Tavares calling a hard Brexit unacceptable and BMW halting production of the MINI for four weeks until Britain exits the EU in 2019. Conversely, Aston Martin and TVR executives are planning to float stocks on the London Stock Exchange, dismissing a no-deal as "not the end of the world".