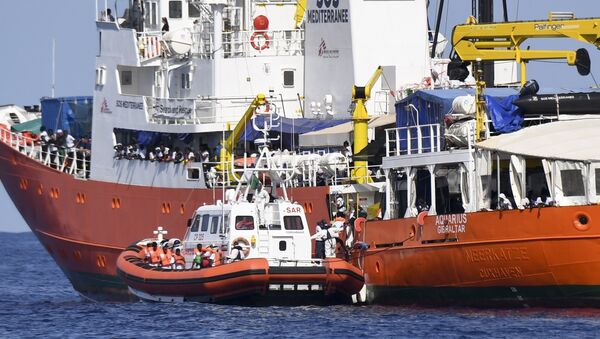 PARIS (Sputnik) - The migrant rescue vessel Aquarius has arrived in the southern French port city of Marseille, migrant charity SOS Mediterranee said, calling on the European governments to provide a flag to the vessel so that it could continue its mission.

"Aquarius has arrived at the Marseille port. We call on the European governments to let us continue our rescue mission by providing a flag to Aquarius, as it intends to return to sea as soon as possible," SOS Mediterranee posted on Twitter.

UPDATE The #Aquarius has arrived in #Marseille for port call. We call on #European governments to allow us to continue our lifesaving work by issuing the Aquarius with a flag. We are determined to be back in international waters in the Central #Mediterranean as soon as possible. pic.twitter.com/4CpqAZBaNX

In late September, the French authorities refused to let the Aquarius dock in Marseille. The ship docked in Malta, and it was agreed that 58 rescued migrants on board would be distributed between France, Spain, Portugal, and Germany. The Aquarius previously sailed under the flag of Gibraltar and then Panama, but both have since revoked their registrations of the boat, leaving its search and rescue mission in limbo.

Italian Gov't Makes the Only Realistic Solution to Migrants' Waves - Author
Over the past several months, the EU states have been at odds over migrant rescue ships. In June, Italy and Malta, for instance, denied entry to the Aquarius, which was then carrying over 600 rescued migrants at the time. Spain eventually allowed the vessel to dock in Valencia.

The Aquarius, charted by SOS Mediterranee and Doctors Without Borders, is the last migrant rescue vessel operating in the central Mediterranean. As Europe has been facing a tough migration crisis since 2015, with scores of people from North Africa and the Middle East fleeing to the EU states amid conflicts at home, a total of 82,100 migrants have arrived in Europe by sea in 2018, according to the latest estimates of the International Organization for Migration.