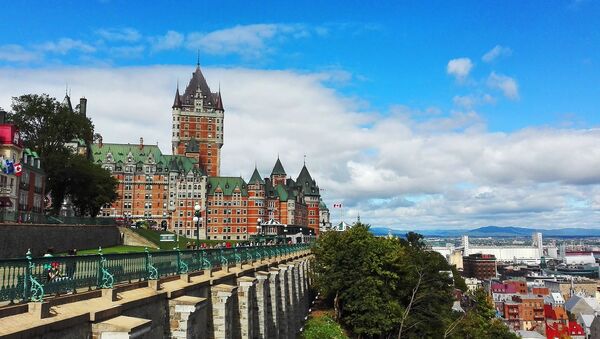 CC0 / /
Subscribe
A new center-right party has won the election in the Canadian province of Québec. The Coalition Avenir Québec has won 73 seats in the 124-seat chamber. The party’s leader Legault has promised to take in 10,000 fewer immigrants annually and suggested expelling new residents who fail to pass tests on French and Québec values within three years.

Radio Sputnik has discussed the election results in Québec with Chedly Belkhodja, a professor at Concordia University's School of Community and Public Affairs in Montreal.

Sputnik: What is your assessment of the election results in Québec? How is this going to change the political landscape of the province?

Chedly Belkhodja: I think people were surprised by the results because we were expecting maybe a tighter race. The pollsters were saying that it would be very close. But finally what happened really was the result something I think that we need to go back year or two to see how this party, Coalition Avenir Québec was able to be seen as the option for older parties.

READ MORE: How to Build a Movement Beyond Donald Trump aka Healing America

I mean the Liberals were in power for a long time and the Parti Québécois also as a traditional party was not as popular.  So QAC was able to talk to a segment of the Québec population, mostly Francophones. So when you look at the results of those who voted for François Legault, they are mostly outside Montreal; all of them except one are outside the island of Montreal, which is the biggest city in Québec, and mostly from other regions of Québec.

Sputnik: Was this victory so much of a surprise? Back in June, the Progressive-Conservative Party won the elections in Ontario that ended Liberal rule. Perhaps that was also sort of a tell-tale sign?

Washington to Accuse China of Leveraging World Trade to Weaken US - Reports
Chedly Belkhodja: Yes, when you look at provincial elections and this is a trend Canada when you have a federal party in power, the Liberals, you tend to see the provinces the willingness to have a different party in power. It happened in Ontario, east of Québec the province of New Brunswick there has been an election last week and there's a possible minority conservative government as well; they're still debating on this.

There's a change. I think you can explain it this way, but you can also see that people are expressing dissatisfaction with traditional political parties. They want a new kind of politics maybe more populist. We tend to see this in Canada also with what happened in Ontario. François Legault is a professional politician. He has a lot of experience, but his team is new and some of his policies may be seen as different from other parties.

Sputnik: What was it about François Legault's campaign promises that particularly won over support? Was it the immigration issue, was it the economy?

Analyst Explains Why Quebec Liberals Lost More than Half of Legislature Seats
Chedly Belkhodja: I think the immigration one was something he used early in the campaign but he was also very concerned that if you push too much on that issue in Quebec. He didn't want to be seen as intolerant even if he talked about reducing the number of immigrants but he also talked about better integration of immigrants. For him the whole notion of reducing the number was always linked to this idea that we need to do better integration in Québec for immigrants because what he was saying was that a lot of immigrants were leaving the province.

He also played on the identity politics issue, which is about the need to have immigrants learn French and know the secular values of Québec. And if they don't want to integrate, we cannot accept them. A lot of people thought he was very hard on this issue. He used it but then he realized that other issues were also important to explain what QAC was able to do. It mostly was talking to the middle class, a very conservative approach, tax cuts and money for families. He used that a lot in the last ten days of the campaign and that helped him a lot, I think.

Sputnik: To what extent did the fact that this was the first election campaign in decades that was not defined by the issue of whether Québec should secede from Canada impact the vote?

Canadian Prime Minister: Trump Can Use Auto Tariffs as Threat Instrument
Chedly Belkhodja: That also created a space for QAC because normally in Québec we see the confrontation between the Liberals and the Parti Québécois. The Liberals were always using the campaign of fear saying that if the Parti Québécois promises independence and puts independence in its platform like the party used to do, it would create the movement for the Liberals securing a Liberal vote with the Anglophones in Québéc and with the ethnic communities.

This time it was a bit different. There was another party on the list, Québec Solidaire, talking about sovereignty but in a different way; talking to a youth that wants to participate in politics. It opened a lot of space for another way of defining Québec. QAC used it a lot and also Québec Solidaire.

Sputnik: What about the new USCMA deal? Did the concessions made by the Trudeau government have a role to play in the election?

Chedly Belkhodja: Maybe on the side I would say yes; at the end of the campaign a bit when we saw the accord, the USCMA and the reaction of politicians. All the parties actually, worried about the consequences of what could happen for some sectors of industry in Québec; mostly agriculture and dairy producers.

I think it's something to be seen. François Legault mentioned that he wants to meet with the prime minister to engage in a healthy conversation with the federal government. He will make sure to defend these sectors. I think it didn't really play out in that campaign. It was not the main issue of the campaign.

Sputnik: What about this victory impacting, possibly, Trudeau's hopes of winning re-election in October?

Chedly Belkhodja: Well, I think it is still early. But when you look at the political landscape in Canada, you have other parties and other options but they are not as defined. Now we will see how the Conservative Party of Canada with its leader, Andrew Scheer, is able to maybe connect with this dissatisfaction of the population.

The views expressed in this article are solely those of Chedly Belkhodja and do not necessarily reflect the official position of Sputnik.