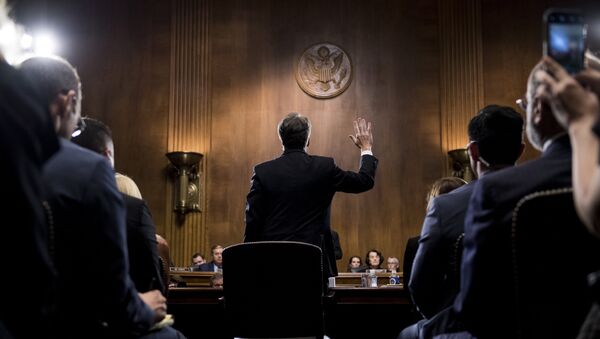 President Donald Trump defended his Supreme court nominee, Brett Kavanaugh, who has been accused of sexual misconduct. Trump said that Kavanaugh has been treated unfairly.

President Trump on Tuesday said the controversy surrounding Kavanaugh’s nomination shows that it is a “scary time for young men,” he told the reporters on the South Lawn of the White House, the Hill reported.

“It is a very scary time for young men in America, when you can be guilty of something you may not be guilty of,” the president said, adding that it is “a very, very difficult standard.”

Kavanaugh’s ‘Visceral Rage’ at Hearing Earns ‘Failing Grade’ - Lawyer
Trump also said that he hopes for a “positive” vote in the Senate this week for Kavanaugh but noted that it will “be dependent on what comes back from the FBI.” The FBI investigation was launched after Kavanaugh and Christine Blasey Ford, who accused him of trying to rape her in the 1980s, testified before the Senate Judiciary Committee last week Thursday. The FBI is expected to deliver a report on its investigation by Friday.

Senate Majority leader Mitch McConnell said on Tuesday that only senators will see the FBI’s final report. “We'll get an FBI report soon. It will be made available to each senator, and only senators will be allowed to look at it,” McConnell told reporters, adding that this is typical for such reports.

On the same day, Ford’s attorneys expressed concern in a letter to FBI Director Christopher Wray and FBI General Counsel Dana Boente that they hadn’t heard from the bureau since the investigation began. Debra Katz and Michael Bromwich, who are representing Ford, requested the contact information of the person leading the investigation.

“It is inconceivable that the FBI could conduct a thorough investigation of Dr. Ford’s allegations without interviewing her, Judge Kavanaugh or the witnesses we have identified in our letters to you,” they said.

Ford’s Senate Testimony Emboldening Sexual Assault Victims to Report Attacks
Two sources with knowledge of the investigation told NBC that the FBI has no further plans to interview Ford after her public testimony during the Senate hearings.

Meanwhile, two of Kavanaugh’s former classmates at Yale Law on Tuesday withdrew their support for his nomination in light of his public testimony. Michael Proctor and Mark Osler, who previously were among 27 of Kavanaugh’s classmates who backed his nomination, wrote in a letter to Senate Judiciary Committee Chairman Chuck Grassley that they could no longer support Kavanaugh because of “nature” of his testimony.

“In our view that testimony was partisan and not judicious and inconsistent with what we expect from a justice of the Supreme Court, particularly dealing with a co-equal branch of government,” they wrote. They also specifically mentioned that their decision wasn’t based on the allegations made by Ford.

Kavanaugh is accused of sexual misconduct in the 1980s by three women: Ford, Deborah Ramirez and Julie Swetnick. He has repeatedly denied all allegations, saying during his testimony last Thursday that they were a “calculated and orchestrated political hit.”