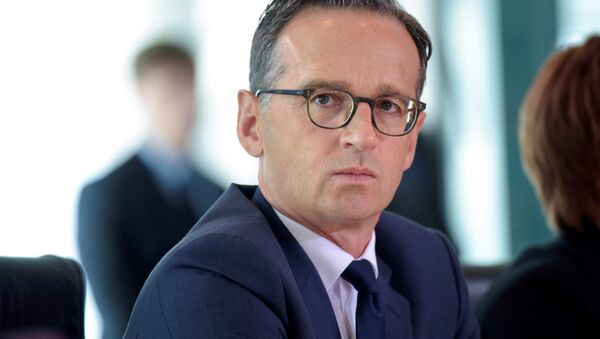 © REUTERS / Stefanie Loos
Subscribe
US-EU tensions have heated up since Washington pulled out from the landmark nuclear deal with Iran and threatened sanctions against European companies that continue doing business with Tehran.

Germany will not make relations with the United States dependent on individual messages on Twitter, since partnership is “more than 280 characters,” German Foreign Minister Heiko Maas said in an interview with Spiegel.

Germany to Fight Alone to Review EU Policy Against US Sanctions - German MP
“Despite all the differences, we still have a working dialogue. I value Secretary of State Mike Pompeo as a colleague and negotiating partner. He accepts our arguments and constructively deals with them," Maas said when asked about the current state of relations between Germany and the United States.

He added that Berlin will not make relations with the United States dependent on private messages on Twitter.

“Our collaboration is more than just 280 tweeted characters. America is bigger than the White House. And the United States remains our closest partner outside Europe," Maas added, responding to a remark by a journalist about US President Donald Trump, who makes harsh judgments on his Twitter account and criticizes his foreign colleagues and political opponents inside the country.

The German foreign minister also commented on Trump's statements about Germany’s dependence on Russian gas supplies. “I am ready to discuss this topic, but on the basis of facts,” he said.

After meeting with Trump in July, European Commission President Jean-Claude Juncker told reporters that the EU is ready to invest in new terminals for receiving liquefied natural gas, mainly from the United States, but only if prices are competitive.

The United States wants European countries to start importing American liquefied natural gas and has threatened to sanction European companies who invest in the construction of the Nord Stream 2 pipeline, which aims to deliver 55 billion cubic meters of Russian natural gas a year to the European Union, across the Baltic Sea to Germany.