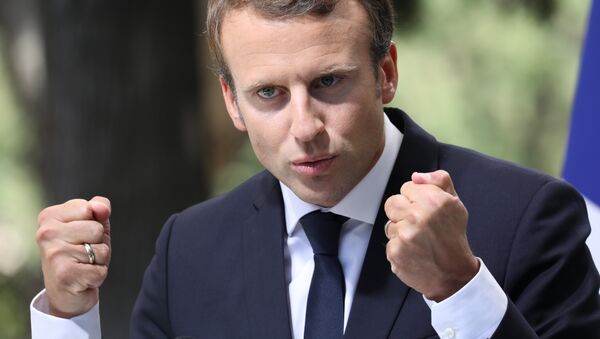 The French president accepted minister's resignation earlier on Wednesday. Collomb's decision to step down followed resignation of Ecology Minister Nicolas Hulot, who claimed that the influence of industrial lobbyists prevented the government from achieving its declared environmental policy goals.

"Gerard Collomb had been one of the earliest and most faithful supporters of Macron, as early as the time Macron was only considering to launch his presidential bid. Therefore Collomb resignation shows … that even the most faithful are now disappointed by Macron, disappointed by his policy agenda, by his personal style and way of governing," Cochard said.

According to Cochard, Macron has become a victim of "hybris" or excessive pride, which has resulted in the situation when even the most faithful "cannot wait to leave" the government.

"It shows as well that the one who was calling himself 'the master of the clocks' one year ago, Macron, does not control anything anymore. He forcefully asked Collomb not to resign and Collomb defied him by announcing his resignation through a newspaper interview. A bit like Hulot announcing his resignation through a radio interview. Before the president knew about it," he argued.

Professor on French Interior Minister's Resignation: 'It’s Perfectly Logical'
Cochard claimed that Macron had been initially "put in place by the globalist lobbies," and now the French people allegedly got to realize that "they had been deceived and manipulated one year ago at the elections."

Commenting on Collomb's resignation, French government spokesman Benjamin Griveaux said it was the minister's personal choice and had nothing to do with a political crisis

Alain Policar of the Paris-based Centre for Political Research (CEVIPOF) shared the view that the latest resignation was "a sign that the presidential team is slowly disbanding."

"We have the sentiment that there are people who do not believe anymore in a new way of doing politics. Among the ‘macronistes,’ among the deputies we have the situation of ‘pre-Fronde’ [under ex-President Francois Hollande a group of the French deputies of the ruling Socialist party were opposed to the economic policy of the president and were called ‘the frondeurs’]. If it continues like this Macron would also face this opposition. We thought that Hollande has reached the peak of unpopularity, but Macron succeeded in getting an even worse unpopularity score," Policar pointed out.

The researcher noted that there were no major political disagreements between Macron and Collomb, since both pursued the policy of the right, so personal differences — namely the president’s alleged "authoritarian" style of governance — were likely a reason for the minister’s decision.

Policar also suggested that incumbent Public Action and Accounts Minister Gerald Darmanin, 35, could be named as a possible successor to Collomb.

Collomb, who served as the mayor of Lyon in 2001-2017, said in mid-September that he might run in the city's mayoral election in 2020. He also stated that in this regard he might leave the ministerial post as early as in 2019.