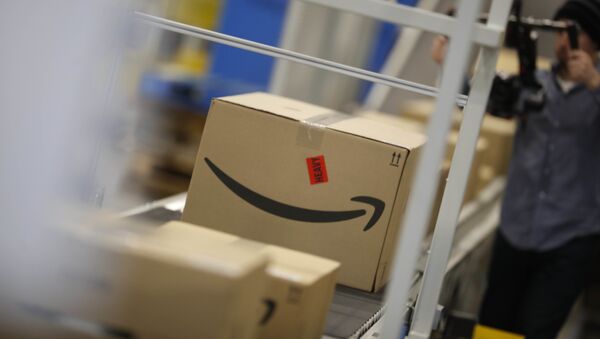 Just because Amazon is getting ready to increase its minimum wage for workers, don't expect working conditions to improve anytime soon, Neal Sweeney, the vice president of UAW Local 5810, the union representing post-doctoral researchers in the University of California system, told Sputnik.

The online retail giant announced Tuesday that it would be raising its minimum wage to $15 an hour for all of its US employees that are full-time, part-time and temporary workers. The changes are due to take effect on November 1, just in time for the holiday season.

"We listened to our critics, thought hard about what we wanted to do, and decided we want to lead," Jeff Bezos, Amazon's founder and CEO, said in a Tuesday statement released by the company. "We're excited about this change and encourage our competitors and other large employers to join us."

The release went on to note that all hourly operations and customer service workers will see a wage increase, even if they're already making $15 an hour.

​But just because the deal sounds rad doesn't mean people should get too excited about it, Sweeney told Radio Sputnik's Loud & Clear on Tuesday.

"For the workers at Amazon, it's a great victory… it means hundreds of thousands of workers are going to get raises," Sweeney told hosts Brian Becker and Walter Smolarek. "But fundamentally, without collective bargaining, it's still the employer having unilateral control."

"The working conditions, the very time pressure that all the workers have faced, the constant surveillance that they're under to meet targets to move the products will continue," the union leader said, before stressing that workers should unionize if they want to see real change in the workplace.

"Only by forming a union and continuing to organize and kind of using this as a stepping stone can they continue to make really important gains that are going to ripple out."

The new wage increase is expected to affect 250,000 Amazon employees and 100,000 seasonal workers, according to the retailer.

Amazon's move comes after the Fight for $15, a grassroots movement founded in 2012, saw thousands of workers calling out their employers and demanding an increase in pay. Fight for $15 has mostly been tied to the retail and fast food industries. However, employees in other sectors have also demonstrated in efforts to improve their pay and livelihoods. Earlier this year, from West Virginia to Arizona, thousands of teachers marched, demanding better school funding and pay.

It should also be noted that the retailer's sudden announcement came weeks after Vermont Sen. Bernie Sanders introduced the Stop Bad Employers by Zeroing Out Subsidies Act, aka the Stop BEZOS Act. The not-so-subtle piece of legislation forces large companies to raise wages by taxing them the value of public benefits that workers would receive.