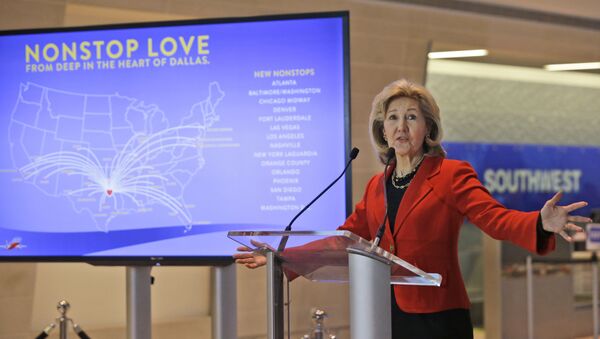 © AP Photo / LM Otero
Subscribe
US Envoy to NATO Kay Bailey Hutchison threatened on Tuesday to “take out” banned cruise missiles allegedly in development in Russia before they become operational.

But should the alleged system become operational, "At that point, we would be looking at the capability to take out a missile that could hit any of our countries," Hutchison told reporters, referring to European allies of the US. "Countermeasures would be to take out the missiles that are in development by Russia in violation of the treaty."

International relations and security analyst Mark Sleboda didn't mince words when analyzing the envoy's remarks in an interview with Radio Sputnik's Loud & Clear. Hutchison "just threatened a preemptive attack on Russia. That's what she did today, and she said it twice — she doubled down on it," he said.

After widespread scrutiny of her comment on a preemptive strike, Hutchison took to Twitter to deny that she had threatened any such thing. "I was not talking about preemptively striking Russia," she said. It is difficult to imagine how else a threat to destroy a missile system before it's up and running can be characterized, however.

Sleboda pointed out that Russia has accused the US of being in violation of the very same treaty. Russia, however, has "good grounds" for the allegation, Sleboda said.

"As far as the INF Treaty is concerned, the situation is evident in which the United States and some of its allies are knowingly violating it, in particular by deploying on their territories the Mk-41 launching systems capable of firing the ground-based cruise missiles," Russian Deputy Foreign Minister Sergey Ryabkov said in August.

"A preemptive attack on Russia would of course be met with a full-range attack back," Sleboda said, underscoring the catastrophic potential for a hot war between the two nuclear powers. "The statements are so ludicrously apocalyptic that I'm afraid it is impossible really to take them seriously," he added.

"Russian presidential spokesman Dmitry Peskov said that he prefers — the Kremlin prefers — not to focus too much on the rhetoric of ambassadors when at the current moment there's so much uncertainty regarding messages coming from the higher level, meaning of course Trump's tweets and the bombastic nature of them," Sleboda said.

000000
Popular comments
The US has broken many treaties with Russia including the proliferation of chemical weapons.... The US currently has the largest stockpiles of chemical and biological weapons in the world...which by treaty should have been destroyed already....
Tazo
3 October 2018, 04:20 GMT6
000000
In the current poisonous political atmosphere anything is possible. I believe Hutchison was just repeating what she heard or received in a communication from the State Department. The United States and NATO is gambling that nuclear weapons will not be used by Russia first. Think about this, this is the second time a high US government official has eluded to a preemptive attack on Russia in the last week!!! Now, do not tell me that both these officials have misspoken. As far as I am concerned two and two still adds up to four. These threats must be taken seriously and not dismissed as idle chatter. Even if Russia is not developing a medium range nuclear delivery system the US/NATO aggressors are known for making up false scenario's in order to start a war.
hopscotch64
3 October 2018, 05:25 GMT5
000000
Newsfeed
0
New firstOld first
loader
LIVE
Заголовок открываемого материала
Access to the chat has been blocked for violating the rules . You will be able to participate again through:∞. If you do not agree with the blocking, please use the feedback form
The discussion is closed. You can participate in the discussion within 24 hours after the publication of the article.
To participate in the discussion
log in or register
loader
Chats
Заголовок открываемого материала
Worldwide
InternationalEnglishEnglishMundoEspañolSpanish
Europe
DeutschlandDeutschGermanFranceFrançaisFrenchΕλλάδαΕλληνικάGreekItaliaItalianoItalianČeská republikaČeštinaCzechPolskaPolskiPolishСрбиjаСрпскиSerbianLatvijaLatviešuLatvianLietuvaLietuviųLithuanianMoldovaMoldoveneascăMoldavianБеларусьБеларускiBelarusian
Transcaucasia
ԱրմենիաՀայերենArmenianАҧсныАҧсышәалаAbkhazХуссар ИрыстонИронауОssetianსაქართველოქართულიGeorgianAzərbaycanАzərbaycancaAzerbaijani
Middle East
Sputnik عربيArabicArabicTürkiyeTürkçeTurkishSputnik ایرانPersianPersianSputnik افغانستانDariDari
Central Asia
ҚазақстанҚазақ тіліKazakhКыргызстанКыргызчаKyrgyzOʻzbekistonЎзбекчаUzbekТоҷикистонТоҷикӣTajik
East & Southeast Asia
Việt NamTiếng ViệtVietnamese日本日本語Japanese俄罗斯卫星通讯社中文（简体）Chinese (simplified)俄罗斯卫星通讯社中文（繁体）Chinese (traditional)
South America
BrasilPortuguêsPortuguese
NewsfeedBreaking
13:16 GMTUS, Australia, Japan, India Agree to Coordinate Afghanistan Policy
13:01 GMTUN General Assembly Convenes for Fifth Day of 76th Session
12:48 GMT'Yellow Vests' Activists Hold Rally in Paris
12:39 GMTBJP Defends Decision to Evict 5,000 Muslims in Assam as Pakistan Lodges Formal Protest With India
12:37 GMT'Totally Spies'? Users Giggle Nervously as Canadian Spy Agency Welcomes Two Citizens Home From China
12:36 GMTClaims of Moscow Manipulating Gas Prices 'Confusing' and 'Fake', Russian Ambassador to Germany Says
12:19 GMTEnvironmentalist Greta Thunberg Launches Veiled Attack on Joe Biden, Accuses POTUS of 'Hypocrisy'
12:14 GMTIran's Top Diplomat Says US Sending 'Negative Sign' to Tehran on JCPOA's Future by Keeping Sanctions
12:04 GMTBiden Admin Trashed Online as Afghan Evacuees Allegedly Assault Female US Soldier at New Mexico Base
12:01 GMTHello, Nessie! Drone Captures Mysterious Shadow Lurking in Loch Ness - Photo, Video
11:50 GMTMonica Lewinsky Allegedly Had Affair With Married School Teacher Before Clinton Sex Scandal
11:29 GMT'Occasional Cortex': AOC Trolled After She Explains Why She 'Wept' Over House's Iron Dome Vote
11:28 GMTBeam Me Up, Jeff! Star Trek Icon William Shatner to Join Blue Origin Spaceflight
11:26 GMTRussian, Turkish Dry Bulk Ships Collide in Bosporus, Turkish Coast Guard Says
11:09 GMTIndian Startup Owner Raghavendra Prasad: 'We Want to Ensure No One is Denied Access to Healthcare'
11:06 GMTSocial Media Goes Ballistic Over The Lancet's 'Bodies With Vaginas' Issue Cover
10:41 GMTHuawei Vows to Keep Fighting US Legal Claims After CFO Meng Wanzhou Freed in Canada
10:30 GMTPremier League Matchweek 6 Preview and Predictions
10:19 GMT'I Explained Everything to Biden': Erdogan Reiterates Ankara Will Buy More S-400s From Russia
10:10 GMTCumbre Vieja Volcano Erupts on Canary Island of La Palma