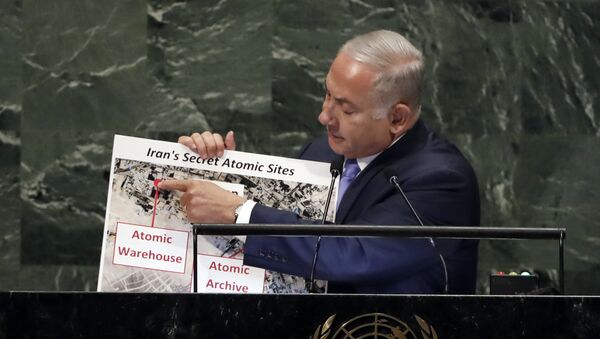 Netanyahu, who presented photos of the supposed secret Iranian nuclear facility during the United Nations General Assembly on Monday, and the US want to further expose these facilities, a senior State Department official told Washington Free Beacon.

“We look to the IAEA to continue to act in a responsible and timely manner in pursuit of any credible information, including the information presented by [Prime Minister] Netanyahu, that could indicate Iran has fallen short of the nonproliferation obligations the IAEA is charged with verifying,” he said.

However, the source didn’t comment on the veracity of Netanyahu’s allegations, just noting that Trump administration was “not a party to any planning to disclose it.”

The International Atomic Energy Agency (IAEA), the UN’s atomic body, is tasked with assessing whether Iran is complying with limitations on its nuclear program put in place through the international nuclear deal reached in 2015. It has been criticized by the administration of US President Donald Trump for failure to inspect some of Iran’s nuclear facilities. On Tuesday, Jackie Wolcott, a well-known critic of the Iranian regime, was appointed the next US representative to the IAEA.

“The United States is committed to getting the IAEA to actually do its job, and now we're going to have Ambassador Wolcott on the ground to push them directly,” the Washington Free Beacon quoted a source it said wasn’t authorized to speak on the record. The source also claimed the IAEA had skipped several warehouses in conducting its report, though it didn’t offer evidence of this.

Netanyahu's UN Speech Aimed at 'Creating Pretexts for Attacks' – Scholar
The latest report presented by the IAEA in August revealed that even after the US left the nuclear deal, Iran continued to comply with its end of the bargain on uranium enrichment levels. Netanyahu, however, says a hidden facility in the Turquz-abad District of Tehran holds “at least 15 ship containers, they're gigantic, 15 ship containers full of nuclear-related equipment and material,” adding that there is also 300 tons of nuclear material.
000000
Popular comments
It was an 'arts & crafts' show, by an arrogant, corpulent, Izzy nincompoop with an axe to grind!. And of course, the American Zionist puppet 'chump trump' administration; with all of it's Heeb cheerleaders, is going to side with Fatman Netanyahu.