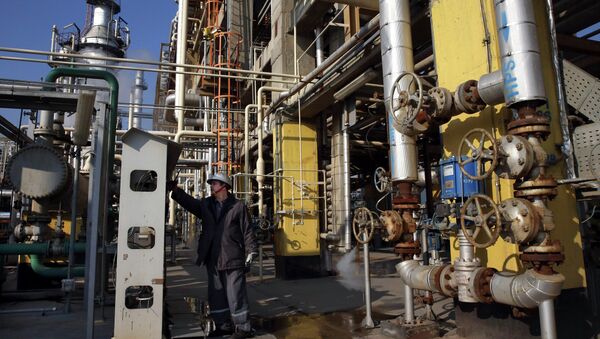 President Donald Trump's intention to impose sanctions on Iranian crude exports could entail a significant drop in global oil supply. This is what analysts told CNBC earlier this week amid concerns that oil prices could reach a three digit number.

Sputnik: To what extent have Iranian sanctions been figured into future prices already?

Just a few months ago, President Rouhani said that if his country will be prevented from exporting oil, all other countries in the Persian Gulf will not be allowed to export oil. Because of this, the market is reacting and I believe the reality will be clear in a few weeks, who will prevail and whether Iran will be completely isolated, which I doubt.

New US Sanctions on Iran to Seriously Affect Oil Prices – Iranian Minister
Sputnik: I believe you're referring to the threat of Iran to block the Strait of Hormuz, which most people think is fairly unlikely as a scenario simply because it would lead to military action against Iran by various countries. Then we also have the position of the European countries; we have Turkey, we have China and others, who have said they're going to continue buying oil from Iran and there's even talk of creating a system to circumvent the US sanctions. Do you think it will kick in time?

Gawdat Bahgat: I would not rule out that Iran will at least maintain the threat to close the Strait of Hormuz; at the end of the day, Iran depends heavily on oil and if it feels that it is going to starve, they will do anything they can. In my mind, I do not think Iran will close the strait but will use it as leverage to bring more pressure on the United States to allow Iran to export oil, because Europe, China, India, many other countries, depend on oil from the Strait of Hormuz.

If Iran keeps threatening and other countries see that there is credibility in the Iranian threats, they will put some pressure on the United States to allow Iran to export some of its oil. This is very speculative and probably in the next few weeks, we will know more. As you pointed out, there are some countries, not only China, India, Turkey, Russia, and some other countries, but also the European Union is not going along with the Trump administration to completely isolate Iran.

Sputnik: How effective do you think their aim will be? They have said that they've decided to go forward with the creation of a payment system, what are your hopes for that? Do you think that it would be effective?

Gawdat Bahgat: I believe the Iranians, so far, have taken the right approach. They have not overreacted, they have not withdrawn from the nuclear deal. More or less they're playing the victim role from the Iranian perspective and this is what the world is seeing: the United States withdrew from the nuclear deal, Iran has honored its commitment. But also, at the same time, Europe has much closer relations with the United States; the American and European economies are very inter-dependent on the each other, so I do not believe at the end of the day Europe will take Iran's side and leave the United States.

Sputnik: What can you say about the tensions between Iran and the US and their allies? There's sort of a fight to put pressure and at the same time keep the oil prices down?