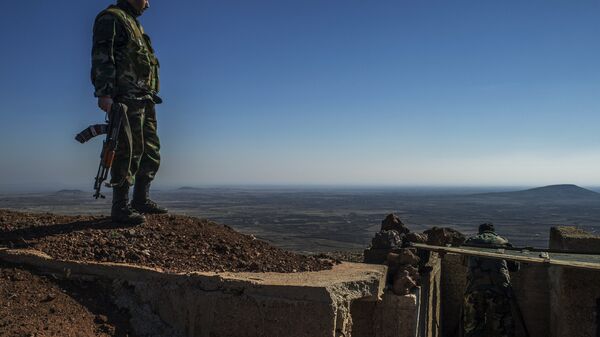 © Sputnik / Valeriy Melnikov
/
Go to the mediabank
Subscribe
International
India
Africa
QUNEITRA (Sputnik) - The Quneitra border crossing between Syria and Israel is ready for opening in the Arab republic, Lt. Gen. Sergei Kuralenko, the deputy commander of the Russian forces in Syria, told journalists on Tuesday.

In late September, Israeli Defense Minister Avigdor Lieberman said that the Jewish state was ready to open the Quneitra checkpoint, adding that "now the ball is in the Syrian court."

Israel Ready to Open Quneitra Checkpoint on Border With Syria – Defense Minister
"The border crossing is ready for opening and to start operating. This was preceded by significant work carried out by the armed forces of the Syrian Arab Republic with the assistance of the Russian Aerospace Forces, this refers, first of all, to the terrorists' defeat in the area," Kuralenko said.

"Of course, the work at the checkpoint was launched by the Russian servicemen, by the Russian military police. First of all, we came to the site, checked it, then proceeded with extensive work to demine the area. At the final stage, the territory's clearance was checked by the mine clearance specialists of the UN mission," Kuralenko said.

The conditions for the resumption of the checkpoint's work were created after the Syrian government forces regained control over Syria's southern areas and the UN peacekeepers returned to the line of separation with Israel.