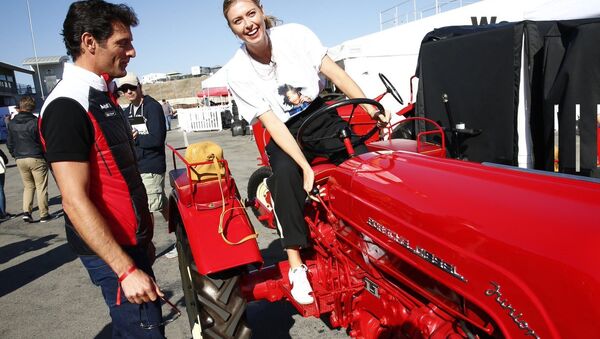 The five-time Grand Slam champion, Maria Sharapova, may have taken a break to rehab after an injury but she’s definitely having a good time off the tennis court.

Having joined thousands of luxury car enthusiasts at the famed Laguna Seca Raceway outside Monterey, California, Maria Sharapova attended Porsche Rennsport Reunion VI, where she happened to try out an extraordinary vehicle that’s, as far as anyone knows, never been raced before – a Porsche tractor.

Nothing good ever happens when I get on a tractor and @aussiegrit is there to witness it. 😂🏁🚗 @porsche_newsroom

​…she seemed to have had a lot of fun:

Social media users became really excited about Sharapova’s picture on the red tractor, with some saying they’d love to see her in a race:

You're beautiful especially on that tractor❤️🌹

Maria driving in a tractor race is something I want to see!

I want that tractor! More photos please! Or more info about it! Wow!!!!

Maria Sharapova managed to build her way back to the Top 25 in the WTA ratings by reaching No. 24 after missing time in 2017 due to a doping suspension.

Most recently, she had to shut down her 2018 WTA season due to a shoulder injury, thus withdrawing from the three tournaments she was supposed to compete in later this year.