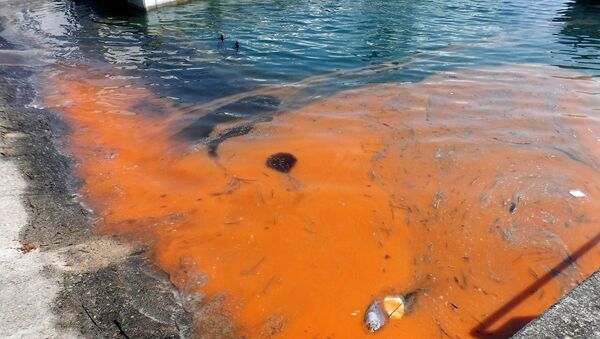 © Wikimedia Commons
Subscribe
On Monday, Florida wildlife officials confirmed that red tide, which is caused by a bloom of toxic red algae, has contaminated part of Florida’s eastern shore after beachgoers in Palm Beach County complained of breathing problems and skin irritation over the weekend.

According to the National Oceanographic and Atmospheric Administration's website, "red tide" is "an unusually persistent harmful algal bloom" of the Karenia brevis which "produces potent neurotoxins, called brevetoxins, that can affect the central nervous systems of many animals, causing them to die."

The toxin can accumulate in molluscs that filter the water or eat the algae, which can then affect birds and mammals, including humans, that eat the molluscs. In addition, wind and waves can vaporize the toxins, causing respiratory problems for people who breathe them in.

"Everyone was coughing this morning," Maggie Scanlon, who was visiting the town of Jupiter on the southeastern coast of Florida, told the Huffington Post Monday.

"I was walking on the beach, and I had to pull the string hat I was wearing down over my mouth because I was coughing so bad," she added.

"It felt like something was burning in my nose, and there was a tingling in my throat. It was really bad," Palm Beach Gardens resident Giselle Mato told the Post.

In a statement Monday, the Florida Fish and Wildlife Conservation Commission (FWC) confirmed that it found "low to medium concentrations of naturally-occurring red tide" near beaches in Palm Beach County. The beaches, which have been temporarily shut down due to a health advisory, are expected to reopen Wednesday.

According to the FWC, red tide is less common on Florida's east coast than the Gulf Coast, having only been documented eight times since the early 1950s.

In September, the FWC confirmed that red tide had spread northward up the Gulf Coast. A map released by the FWC Friday reveals that levels in that area have increased from "low" to "medium."

"You can't oversimplify it as ‘you caused red tide,'" Environmental activist Rob Moher, president of the Conservancy of Southwest Florida, told Sputnik last month about the the issue.

"But certainly the severity of the red tide this year is certainly notable — we [Florida] have record mortality for sea turtles, for example; I think it's 4.5 times higher than any other time in recent history that they've been keeping data," Moher added.

According to Moher, red tide is a "predictable crisis."