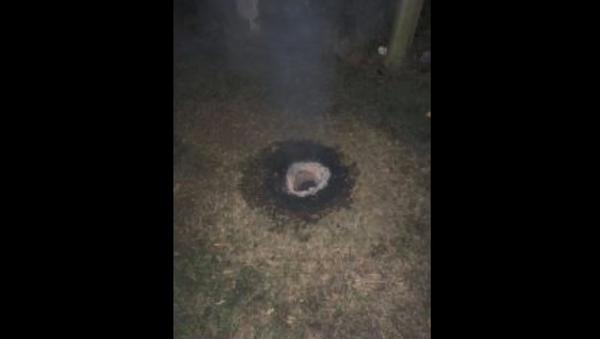 A meter-deep hole on a northern Arkansas lawn was recently spotted spewing flames for nearly 40 minutes, and officials are struggling to come up with sensible answers to what the hole is and whence the flames came.

Is the unsuspecting hamlet of Midway, Arkansas, the place selected for aliens to touch down, or for the gates of Hell to be thrown wide open? Maybe it's a testing ground for some new super-high-tech energy weapon crafted by the US military?

"As far as the spiritual Satan goes, we've ruled that out," Baxter County Judge Mickey Pendergrass told the Arkansas Democrat-Gazette for a story published October 1. "He didn't come up and stick his pitchfork in the ground and blow that hole out."

So then what caused flames to shoot 12 feet into the air from this volleyball-sized hole for 40 minutes on September 17?

Jim Sierzchula, Baxter County's emergency management director, worked with geologists from the Arkansas Geological Survey to scope the hole and turn up some better answers.

"They scoped the hole with a camera and determined it extended horizontal before intercepting a nearby drainage ditch about 10 feet away and 3 feet below the ground surface," according to a report from Ty Johnson and Danny Rains with the Geological Survey. "This was determined to be an animal hole."

Local utility provider Black Hills Energy said in a statement obtained by the Gazette that while their company "does not provide natural gas service in Midway, the local fire department contacted us to assist with their fire investigation… Our technicians responded and detected no natural gas in the area."

"The soil samples should clear up any possibility of gasoline or anything else put down the hole or migrating groundwater contaminant such as gasoline," Ty Johnson of the Geological Survey told the Gazette.

Two weeks have passed since the fire fountain shot its baffling blaze into the northern Arkansas sky, and the lack of answers has given netizens the opportunity speculate about its causes themselves.

One YouTuber, DahBoo77, noted that a volcanic pipe once fed a now-extinct volcano in an area now called the Crater of Diamonds, although the diamond fields are roughly 175 miles south of Midway.

Another, using the name mental_boost, noted some of the inconsistencies in the official story, such as the fact that the fire chief observed the flames for nearly three-quarters of an hour, but neither photos nor video exist of the episode, only of the smoldering hole afterward.

Whatever the cause, the conflagration reportedly hasn't returned since September 17, so we may never know for sure.