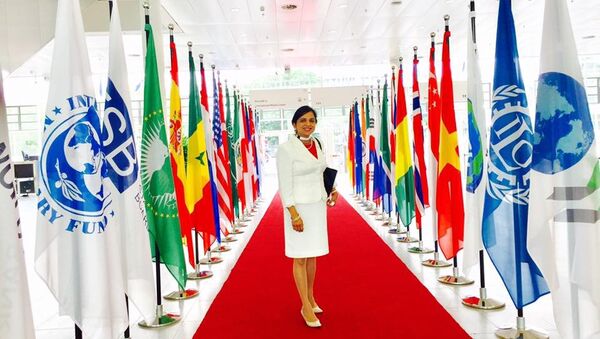 Gurdeep Kaur Chawla, a renowned diplomatic interpreter, disclosed the challenges and delight of carrying the huge responsibility of translating from English to Hindi and vice versa the conversations of global leaders like the US president and the Indian prime minister during events and meetings of high significance in this interview with Sputnik.

Sputnik: What are the toughest challenges you face as an interpreter?

Gurdeep Kaur Chawla: Major challenges are that you have to translate what has been said by the dignitary. Not a single word or fact must be left out. I have to do it in real time as there is no time to think and pause in these big and important bilateral meetings. There is on the spot, do or die situation.

Trump Gives Thumbs Up to Book Branding Him 'Most Sound-Minded' US President Ever
Sputnik: Many times, we require reading between the lines of what the dignitary is saying and what he or she exactly wants to convey. How do you deal with such a situation?

Gurdeep Kaur Chawla: Before any diplomatic meetings, I have to prepare about the meeting, such as purpose, objective etc. Further, I have to get acquainted about the leader for whom I am going to interpret. What is his vocabulary, his accent, pronunciation, expressions, how he talks — I have to get precise knowledge about these. You can say "getting under the skin of the leader." For example, when Prime Minister Modi was in the US, I interpreted for him at UNGA (his first speech in Hindi) and at the Madison Square Garden. Before interpreting, I listened to some of his, earlier speeches to get an idea about his vocabulary and expression. Because as an interpreter, you have to be a bit ahead of the leader. And you have to also analyze and think what's going in his mind, what will happen next, what will he speak as if you are sitting in his mind.

Ex-US Diplomat Nuland: One-on-One Meetings at Summits 'Are Never a Good Idea'
Sputnik: You have worked as an interpreter for former US President Obama and now you are also interpreting for President Donald Trump. What's the difference between working with the two?

Sputnik: You were present during the India-US 2+2 talks in Delhi; what was the atmosphere like during the talks?

Gurdeep Kaur Chawla: As a diplomatic interpreter, I was there but I am not supposed to disclose the details of the bilateral meeting. But one important thing is that it was good for both the countries.

The views and opinions expressed in this article are those of the speaker, and do not necessarily reflect those of Sputnik.